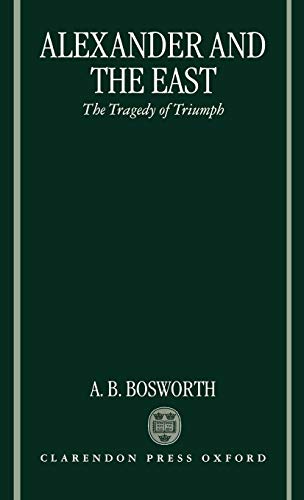 Alexander and the East
by A. B. Bosworth

In Stock
$62.99
+10% GST
A look at Alexander the Great's activities in Central Asia and Pakistan, which draws a bleak picture of massacre and repression comparable to the Spanish conquest of Mexico. The evolution of Alexander's views of empire and concept of universal monarch are among the topics investigated.
Very Good
Only 1 left

Alexander and the East Summary

Alexander and the East: The Tragedy of Triumph by A. B. Bosworth

In this study Brian Bosworth looks at the critical period between 329 and 325 BC, when Alexander the Great was active in Central Asia and what is now Pakistan. He documents Alexander's relations with the peoples he conquered, and addresses the question of what it meant to be on the receiving end of the conquest, drawing a bleak picture of massacre and repression. At the same time Alexander's views of empire are investigated, his attitude to his subjects, and the development of his concepts of personal divinity and universal monarchy. Analogies are thus drawn with the Spanish conquest of Mexico, which has a comparable historiographical tradition and parallels many of Alexander's dealings with his subjects. Although of concern to the specialist, this book is equally directed at the general reader interested in the history of Alexander and the morality of empire.

Alexander and the East Reviews

An essential acquisition for graduate and advanced undergraduate collections. * Rochelle Snee, Religious Studies Review *
Sensitive discussion of Alexander the Great ... Bosworth judiciously assesses the sources, but also considers the geographical and social context. Professor Bosworth deserves to be read, and not just by classicists or historians of the ancient world, since this is a prudent investigation of the construction of the heroic image of a totalitarian ruler * Times Literary Supplement *
This dense, rich book is a major contribution to Alexander studies, but the reader should be forewarned: it paints a bleak and dismal picture of the conqueror. One wonders why anyone would want to claim such a man as a national hero. * Int. History Review xx,1 *
This monograph ... makes a number of profound statements not just about matters relating to Alexander's campaigns in the East, but also about fundamental issues which are central to Alexander studies ... What brings the whole book together and work as a monograph is the subtle interweaving of recurring themes ... an important contribution to Alexander studies ... It is a tight and controlled exposition and exploration of various problems connected with Alexander's campaigns in the East, while at the same time presenting deeper insights into who Alexander was as disinterred from a difficult, complex and often contradictory source tradition. * Journal of Hellenic Studies *
B's main themes are important and he develops them well, with numerous trenchant and pithy observations. The portrait of Alexander he builds up is a sobering one, at times chilling. His forthright criticisms of the king will win him few friends among admirers of Alexander, but are a necessary antidote to the recurrent temptation to idealize him. * A. D. Lee, The Classical Review *
an important book, which should be of interest to a wider audience than specialists on Alexander the Great, since it tackles questions such as the creation of imperial knowledge and cross-cultural communication ... B.'s work has established a new level of scholarly perception, which must influence all who wish to study Alexander. * Michael Whitby, University of Warwick, Hermathena, no 164, Summer 1998 *

GOR009701454
Alexander and the East: The Tragedy of Triumph by A. B. Bosworth
A. B. Bosworth
Used - Very Good
Hardback
Oxford University Press
1996-12-01
234
0198149913
9780198149910
N/A
Book picture is for illustrative purposes only, actual binding, cover or edition may vary.
This is a used book - there is no escaping the fact it has been read by someone else and it will show signs of wear and previous use. Overall we expect it to be in very good condition, but if you are not entirely satisfied please get in touch with us.