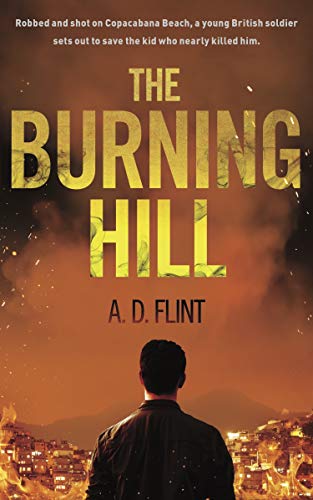 The Burning Hill
by A.D. Flint

In Stock
$26.49
inc. GST
Robbed and shot on Copacabana Beach, a young British soldier sets out to save the favela kid who nearly killed him
Very Good
Only 2 left

The Burning Hill by A.D. Flint

"A fast-paced, tightly plotted action/crime thriller that will appeal to anyone who enjoys Lee Child, Peter James, Tom Rob Smith, or who liked the film City of God. An impressive debut." - The i newspaper
"I could taste the dust, smell the smoke and feel the hairs rise on the back of my neck as tensions grew... a genuinely compelling story. Five Stars." - The Love Books Group

On the run from unjust court-martial back home, a young British soldier gets robbed and shot on Copacabana Beach. The bullet in Jake's head should have been fatal, but miraculously, it saves him from a previously undetected condition that soon would have killed him.

Jake doesn't believe in fate, nor does he feel he owes anything to anybody, but he does hate injustice. Vilson, the teenage favela kid who fired the bullet, is a victim of injustice, in a corner with a corrupt cop and a sadistic drug-lord after his blood.

With a turf war erupting in Vilson's favela, fear stalks every narrow alleyway, and anyone dragged up to the notorious Burning Hill had better hope they're dead before they get there. But it's not just fear that shapes life in the favela, belief is also powerful, able to both save and destroy.

The Burning Hill is about the power of belief and one man's desire for justice at any cost.

Gritty, hard-hitting and utterly compulsive, this is a book that has you wanting to head straight back to page one straight after turning the last page. Inked Book Reviews
I LOVE books that pull you in so deeply, and this is a story that does exactly that - every location, the heat, the dust, the smells, the tastes - I was living this story. Not to mention the completely compelling plot that made it so I could not put this book down. Magnolia Reads Reviews
I've never read a book in which the life/corruption in Brazil was so vividly explained, and this story will be with me for a long time.' Varietats Reviews

On a June afternoon in 2000 there was a robbery just a few blocks from where the author was living in Ipanema, Rio de Janeiro. It turned into a hostage situation. The teenage robber had survived a notorious massacre of street children outside a Rio church years before, and the tragedy that played out in the aftermath of the robbery on live TV news was an embodiment of the desperation of life at the bottom of the heap. An ugly thing in this beautiful city, shocking, even to a society inured to everyday violence.

As a Brit new to Rio, the author was beguiled by the city, and found it profoundly disturbing to watch something happening just down the road that was so out of control and so wrong. The author spent a year in Brazil and now lives on the south coast of England with his Brazilian wife and two sons.