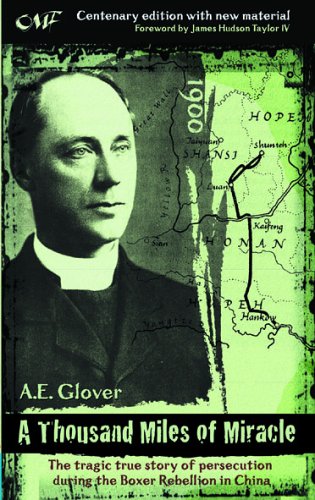 Archibald Glover, an ordinary man, and his family, arrived in China to experience one of the most terrifying ordeals of the 20th century. The Boxer Rebellion of 1900 left almost 50,000 Christians dead. The horrifying stories that came out from China led to an International Expeditionary force being sent to give relief to those struggling towards the safety of 'Treaty ports'. This is one family's story that stands as a tribute to those who endured a terrible persecution, just a hundred years ago.

In China, 1900 is remembered for the Boxer Rebellion. The annals of church and missionary history record that 181 missionaries and 49,000 Chinese Christians were martyred. Among the missions, the China Inland Mission (now O.M.F.) lost the largest number - 58 missionaries and 22 children. Subsequent to the dramatic events of this book , China has suffered continuing persecution.... the founding of the republic in 1912, the 1927 revolution, the Long March of the 1930's, the Sino-Japanese conflict of 1937-45, the communist take-over of 1948-49, the Cultural Revolution 1966-70 and the 1989 events in Tiananmen Square....Faith in God and the evidence of God's faithfulness have shone through Christians' trials and tears through the years. This is undoubtedly one of the most remarkable records of triumph in tragedy.

The Boxer Rebellion was soon forgotten in greater world tragedies and tumults but out of it came a classic of Christian experience: this book. It is 'a plain, unvarnished narrative of a humanly desperate situation on the one hand , and of a divinely miraculous salvation on the other'.

-- John Pollock, Biographer
GOR001983957
9781857925111
1857925114
1000 Miles of Miracle by A Glover
A Glover
Biography
Used - Good
Paperback
Christian Focus Publications Ltd
20010101
336
null null null null null null null null null null
Book picture is for illustrative purposes only, actual binding, cover or edition may vary.
This is a used book - there is no escaping the fact it has been read by someone else and it will show signs of wear and previous use. Overall we expect it to be in very good condition, but if you are not entirely satisfied please get in touch with us
Trustpilot