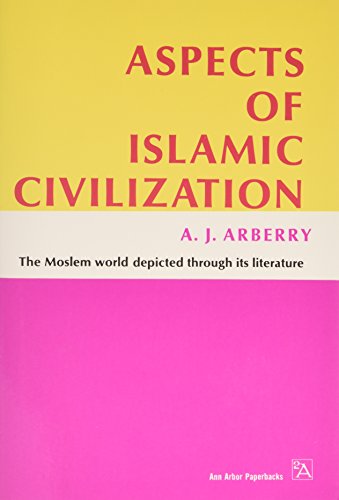 Out of Stock
$67.99
inc. GST
An anthology of selections from Arabic and Persian writers
Well Read
Only 0 left

This anthology is made up of selections from Arabic and Persian writers who have given world renown to Islamic literature--such as Hafiz, Sa'di, Jalal al-Din Rumi, Omar Khayyam, Ibn al-Farid, Avicenna, Ibn Hazm--and from such works as the Koran, the Masnavi, and the Moorish Anthology. It is an invaluable collection of sources for anyone interested in the Moslem world and a fascinating volume to browse in.

GOR010188671
Aspects of Islamic Civilization by A.J. Arberry
A.J. Arberry
Used - Well Read
Paperback
The University of Michigan Press
1967-03-15
416
0472061305
9780472061303
N/A
Book picture is for illustrative purposes only, actual binding, cover or edition may vary.
This is a used book - there is no escaping the fact it has been read by someone else and it will show signs of wear and previous use. Overall we expect it to be in very good condition, but if you are not entirely satisfied please get in touch with us.