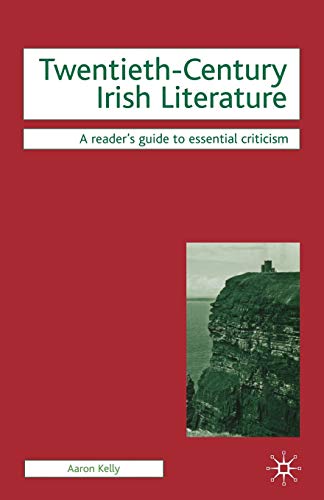 Twentieth-Century Irish Literature
by A. Kelly

Twentieth-Century Irish Literature by A. Kelly

'Consistently of a very high standard, lucidly written, and impressively comprehensive in coverage.' - Bernhard Klein, University of Essex, UK 'This critique encapsulates the ever-changing literary horizon of Ireland and condenses the key arguments and viewpoints into a clear, comprehensible framework...It is absolutely ideal for anyone who is interested in the interplay between culture and literature in Ireland.' - Adam Wilbourn, Times Higher Education Textbook Guide

AARON KELLY is Lecturer in Modern and Contemporary Literature at the University of Edinburgh, UK.

GOR006037258
Twentieth-Century Irish Literature by A. Kelly
A. Kelly
Readers' Guides to Essential Criticism
Used - Very Good
Paperback
Macmillan Education UK
2008-06-03
216
0230517196
9780230517196
N/A
Book picture is for illustrative purposes only, actual binding, cover or edition may vary.
This is a used book - there is no escaping the fact it has been read by someone else and it will show signs of wear and previous use. Overall we expect it to be in very good condition, but if you are not entirely satisfied please get in touch with us.