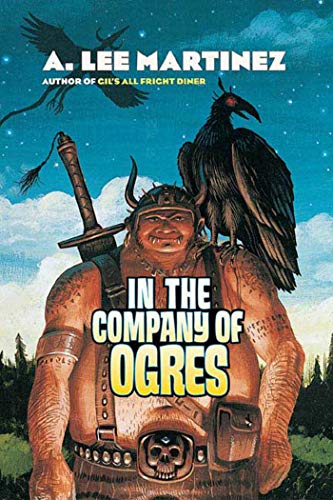 In the Company of Ogres
by A. Lee Martinez

Out of Stock
$32.99
inc. GST
For someone who's immortal, Never Dead Ned manages to die with alarming frequency, he just has the annoying habit of rising from the grave. As Ogre Company's newly appointed commander, Ned has only six months to whip it into shape or face an even more hideous assignment, but that's not the worst of his problems.
Very Good
Only 0 left

In the Company of Ogres Summary

In the Company of Ogres by A. Lee Martinez

For someone who's immortal, Never Dead Ned manages to die with alarming frequency, he just has the annoying habit of rising from the grave. But this soldier might truly be better dead than face his newest assignment. Ogre Company is the legion's dumping ground - a motley, undisciplined group of monsters whose leaders tend to die under somewhat questionable circumstances. That's where Ned's rather unique talents come in. As Ogre Company's newly appointed commander, Ned finds himself in charge of such fine examples of military prowess as a moonstruck Amazon, a very big (and very polite) two-headed ogre, a seductively scaly siren, a blind oracle who can hear (and smell) the future, a suicidal goblin daredevil pilot, a walking tree with a chip on its shoulder, and a suspiciously goblinesque orc. Ned has only six months to whip Ogre Company into shape or face an even more hideous assignment, but that's not the worst of his problems. Because now that Ned has found out why he keeps returning from the dead, he has to do everything he can to stay alive.

In the Company of Ogres Reviews

"[A] terrific debut. . . . Fans of Douglas Adams will happily sink their teeth into this combo platter of raunchy laughs and ectoplasmic ecstasy." --Publishers Weekly (starred review) on Gil's All Fright Diner

"[A] laugh-out-loud comic fantasy that should appeal to fans of Terry Brooks's Landover novels." --Library Journal on Gil's All Fright Diner

"Do you know a young man twelve to seventeen years old who hates reading? Does he love gory subjects, especially when action-packed sex, danger, horror, and fantasy are included? Then this is the book for him!" --Voices of Youth Advocates on Gil's All Fright Diner

"Delightfully droll, this comic romp will be a crowd-pleaser." --Booklist on Gil's All Fright Diner

"It's an appetizing snack perfect for devouring quickly over a hot cop o' joe." --Fangoria on Gil's All Fright Diner

"If there's any justice in this world, Martinez is already working on a sequel to star Duke, Earl, Cathy, and the ghost of a plucky little dog." --Analog Science Fiction and Fact on Gil's All Fright Diner

"It's horror both humorous and grisly, a twisted take on small-town America and buddy adventures." --Locus on Gil's All Fright Diner

"A supernatural concoction spicier and tastier than a bowl of Texas red. . . . The funniest book you ever read about the undead, the occult, and Armageddon." --The Decatur Daily, Alabama, on Gil's All Fright Diner

"Can a vampire find true love with a ghost? Can a teenage witch open the gates of Hell? Anything can happen in Martinez's wacky debut." --Charlaine Harris, bestselling author of Dead to the World on Gil's All Fright Diner

About A. Lee Martinez

GOR007049361
In the Company of Ogres by A. Lee Martinez
A. Lee Martinez
Used - Very Good
Paperback
St Martin's Press
2006-09-29
384
0765315475
9780765315472
N/A
Book picture is for illustrative purposes only, actual binding, cover or edition may vary.
This is a used book - there is no escaping the fact it has been read by someone else and it will show signs of wear and previous use. Overall we expect it to be in very good condition, but if you are not entirely satisfied please get in touch with us.