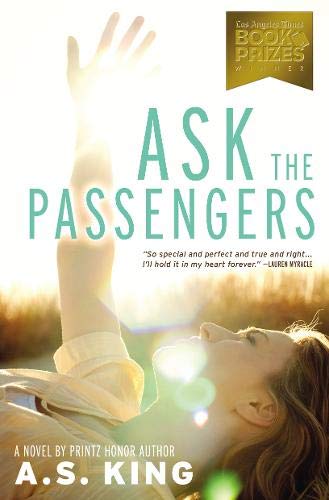 Ask the Passengers
by A. S. King

Ask the Passengers by A. S. King

Astrid Jones copes with her small town's gossip and narrow-mindedness by sending love to the passengers in the airplanes flying overhead. Maybe they'll know what to do with it. Maybe it'll make them happy. Maybe they'll need it. Her mother doesn't want it, her father's always stoned, her perfect sister's too busy trying to fit in, and the people in her small town would never allow her to love the person she really wants to--another girl named Dee. There's no one Astrid feels she can talk to about this deep secret or the profound questions that she's trying to answer. But little does she know just how much sending her love--and asking the right questions--will affect the passengers' lives, and her own, for the better. In this unmistakably original portrayal of a girl struggling to break free of society's boxes and definitions, Printz Honor author A.S. King asks readers to question everything--and offers hope to those who will never stop seeking and sharing real love.

A.S. King is the author of the highly acclaimed novel Everybody Sees the Ants and the Edgar Award nominated, Michael L. Printz Honor book Please Ignore Vera Dietz. She is also the author of The Dust of 100 Dogs, an ALA Best Book for Young Adults. After returning from Ireland where she spent over a decade living off the land, teaching adult literacy, and writing novels, King now lives deep in the Pennsylvania woods with her husband and children. Learn more at www.as-king.com.

GOR005909431
Ask the Passengers by A. S. King
A. S. King
Used - Very Good
Hardback
Little, Brown & Company
2012-10-25
304
0316194689
9780316194686
Winner of L.A. Times Book Prize (Young Adult Literature) 2012 Winner of Carolyn W. Field Award 2013 Commended for Lambda Literary Awards (Children/Young Adult) 2013 Commended for Tayshas Reading 2014 Commended for Capitol Choices: Noteworthy Books for Children and Teens (Fourteen and Up) 2013 Short-listed for Volunteer State Book Awards (High School) 2014 Short-listed for Rhode Island Teen Book Award 2014 Short-listed for Evergreen Young Adult Book Award 2015
Book picture is for illustrative purposes only, actual binding, cover or edition may vary.
This is a used book - there is no escaping the fact it has been read by someone else and it will show signs of wear and previous use. Overall we expect it to be in very good condition, but if you are not entirely satisfied please get in touch with us.