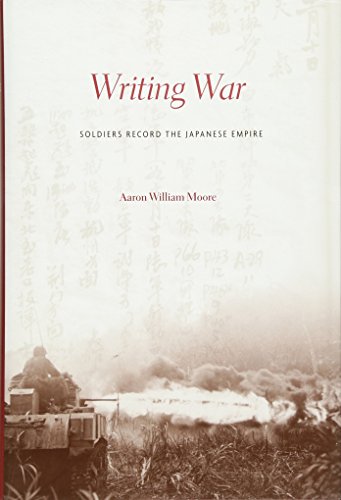 Writing War examines over two hundred diaries, and many more letters, postcards, and memoirs, written by Chinese, Japanese, and American servicemen in the Pacific from 1937 to 1945. As he describes conflicts that have often been overlooked by historians, Aaron William Moore reflects on diaries as tools in the construction of modern identity.

Historians have made widespread use of diaries to tell the story of the Second World War in Europe but have paid little attention to personal accounts from the Asia-Pacific Theater. Writing War seeks to remedy this imbalance by examining over two hundred diaries, and many more letters, postcards, and memoirs, written by Chinese, Japanese, and American servicemen from 1937 to 1945, the period of total war in Asia and the Pacific. As he describes conflicts that have often been overlooked in the history of World War II, Aaron William Moore reflects on diaries as tools in the construction of modern identity, which is important to our understanding of history.

Any discussion of war responsibility, Moore contends, requires us first to establish individuals as reasonably responsible for their actions. Diaries, in which men develop and assert their identities, prove immensely useful for this task. Tracing the evolution of diarists' personal identities in conjunction with their battlefield experience, Moore explores how the language of the state, mass media, and military affected attitudes toward war, without determining them entirely. He looks at how propaganda worked to mobilize soldiers, and where it failed. And his comparison of the diaries of Japanese and American servicemen allows him to challenge the assumption that East Asian societies of this era were especially prone to totalitarianism. Moore follows the experience of soldiering into the postwar period as well, and considers how the continuing use of wartime language among veterans made their reintegration into society more difficult.

This is an ambitious book, based on a remarkable wealth of material, using sources originally in Chinese and Japanese, and in some cases presumably difficult to decipher from the scribbled battlefront notes. The result is a quite exceptional though disturbingly graphic window onto the reality of combat. This is not a book for the squeamish...Moore has a story that needs little philosophical scaffolding, and he tells it extremely well...The diaries are a vital source for showing how soldiers can develop hatreds that are not really directed from above, but grow from the loss of companions, the evidence of enemy brutality and the raw fear generated by messy combat in distant places against a rarely discernible enemy...A richly suggestive and at times despairingly poignant account, essential reading for anyone who wants to understand more fully what combat does to the men who endure it.
-- Richard Overy * Literary Review *
A highly original exploration of the experiences of Japanese, Chinese, and American soldiers in the Second World War. Moore's novel and penetrating insights into the lives of the men who fought helps us to understand the terrible emotions produced in combat and the shocking brutality of the Pacific War. -- Diana Lary, author of The Chinese People at War: Human Suffering and Social Transformation, 1937-1945
Moore has rewritten our understanding of the Japanese empire. Using the diaries of servicemen from China, Japan, and the U.S., he shows us the lived experience of combat in the Second World War, and the complex and intriguing ways in which it was reflected in writing and identity. Just as Paul Fussell and John Dower gave us new ways to look at war, so Moore forces us to rethink a subject that we thought we knew. -- Rana Mitter, University of Oxford
In a richly layered multi-lingual and multi-archival analysis, Moore expands our grasp of how Japanese, Chinese, and American soldiers during World War II crafted their own identities on the battlefield and on the home front in their struggle to define military victory and defeat at the ground level. He confronts the hegemony of war as a narrative of the nation and reveals how the language of self in soldiers' diaries redefines the nature of war. -- Barak Kushner, University of Cambridge
Perhaps most disturbing of all is the way that Moore analyses the actual process of diary writing by these men. In all three countries, he reveals, the thoughts and feelings of soldiers were closely monitored by their superior officers. As a consequence the sentiments they expressed were self-policed: soldiers effectively used their diaries as a way of convincing themselves to act in the way that was required of them by the state. The implications of this are huge, and draw a question mark over one of our strongest taboos about the war. When Chinese, Japanese or American soldiers spurred themselves on to commit acts of bravery, or atrocity, how much were they expressing their own desires and how much were they resigning themselves to things that were expected of them? Does this--can this ever--at least partially absolve them of the things they did during wartime?
-- Keith Lowe * Financial Times *
Historians writing about WWII often rely on official reports and diary entries in completing their narratives. Few historians depend entirely on personal written communications of the combatants. Moore breaks the mold by fully utilizing letters, diaries, and postcards. The author tracks not only the soldiers and how the battlefield altered their personalities, but their perceptions of the conflict both during and after the war. This was especially noticeable for the Japanese and Chinese troops, whose cultures experienced an upsurge in diary writing in the 1930s. Although maintaining diaries had been a staple of Americans for generations, the same was not true for the Japanese and Chinese. The Chinese normally wrote of their battlefield failures followed by accounts of Japanese atrocities and Chinese collaborators working for the occupation. Early in the war, the Japanese initially explained their successes in China and elsewhere, but soon, as the tide of battle changed, Japanese soldiers focused on their impending deaths. Moore's brilliant study will help generations of scholars redefine the understanding of the effects of WWII in Asia and the Pacific on troops of all the belligerent powers. -- C. C. Lovett * Choice *
Aaron William Moore is Lecturer in East Asian History at the University of Manchester.
GOR010824170
Writing War: Soldiers Record the Japanese Empire by Aaron William Moore
Aaron William Moore
Used - Like New
Hardback
Harvard University Press
2013-06-10
388
0674059069
9780674059061
Nominated for Guggenheim-Lehrman Prize in Military History 2013 (United States) Nominated for Distinguished Book Award - Military History 2014 Nominated for John K. Fairbank Prize in East Asian History 2014
Book picture is for illustrative purposes only, actual binding, cover or edition may vary.
The book has been read, but looks new. The book cover has no visible wear, and the dust jacket is included if applicable. No missing or damaged pages, no tears, possible very minimal creasing, no underlining or highlighting of text, and no writing in the margins
Trustpilot