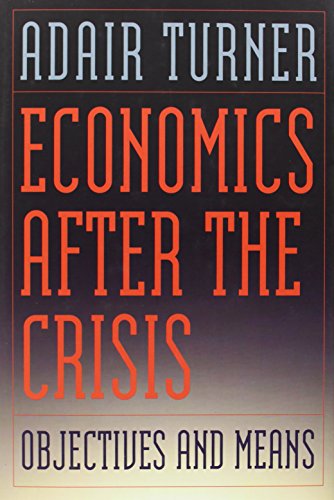 Economics After the Crisis
by Adair Turner (Chairman)

Out of Stock
$20.49
inc. GST
A noted economist challenges the fundamental economic assumptions that cast economic growth as the objective and markets as the universally applicable means of achieving it.
Like New
Only 0 left

Economics After the Crisis Summary

Economics After the Crisis: Objectives and Means by Adair Turner (Chairman)

A noted economist challenges the fundamental economic assumptions that cast economic growth as the objective and markets as the universally applicable means of achieving it. The global economic crisis of 2008-2009 seemed a crisis not just of economic performance but also of the system's underlying political ideology and economic theory. But a second Great Depression was averted, and the radical shift to New Deal-like economic policies predicted by some never took place. Perhaps the correct response to the crisis is simply careful management of the macroeconomic challenges as we recover, combined with reform of financial regulation to prevent a recurrence. In Economics After the Crisis, Adair Turner offers a strong counterargument to this somewhat complacent view. The crisis of 2008-2009, he writes, should prompt a wide set of challenges to economic and political assumptions and to economic theory. Turner argues that more rapid growth should not be the overriding objective for rich developed countries, that inequality should concern us, that the pre-crisis confidence in financial markets as the means of pursuing objectives was profoundly misplaced.

Economics After the Crisis Reviews

...With this book, Turner has proved that Britain still produces thinkers who combine ideas with practical experience. -New Statesman
Adair Turner is the jewel in the crown of British public servants. He is one of a tiny minority in public life today capable of thinking and acting at the highest level. Economics After the Crisis, based on three lectures he delivered at the London School of Economics in 2010, is a thinking person's delight, not least for the clear and lucid way in which Turner sets out his arguments. -Robert Skidelsky, The Times Literary Supplement

Adair Turner, Chairman of Britain's Financial Services Authority from September 2008 to March 2013, is a Senior Fellow of the Institute for New Economic Thinking. He is Visiting Professor at the London School of Economics and at Cass Business School, City University London, and the author of Just Capital: The Liberal Economy.

GOR010435338
Economics After the Crisis: Objectives and Means by Adair Turner (Chairman)
Adair Turner (Chairman)
Lionel Robbins Lectures
Used - Like New
Hardback
MIT Press Ltd
2012-03-23
128
026201744X
9780262017442
N/A
Book picture is for illustrative purposes only, actual binding, cover or edition may vary.
The book has been read, but looks new. The book cover has no visible wear, and the dust jacket is included if applicable. No missing or damaged pages, no tears, possible very minimal creasing, no underlining or highlighting of text, and no writing in the margins.