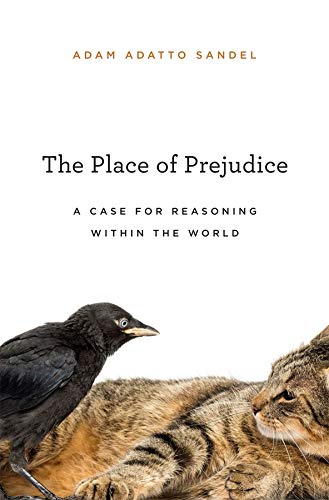 The Place of Prejudice
by Adam Adatto Sandel

In Stock
$51.99
inc. GST
We associate prejudice with ignorance and bigotry and consider it a source of injustice. Can prejudice have a legitimate place in moral and political judgment? Adam Sandel shows that prejudice, properly understood, is not an obstacle to clear thinking but an essential aspect of it. The aspiration to reason without preconceptions is misguided.
Very Good
Only 1 left

The Place of Prejudice Summary

The Place of Prejudice: A Case for Reasoning within the World by Adam Adatto Sandel

Today we associate prejudice with ignorance and bigotry and consider it a source of injustice. So how can prejudice have a legitimate place in moral and political judgment? In this ambitious work, Adam Sandel shows that prejudice, properly understood, is not an unfortunate obstacle to clear thinking but an essential aspect of it. The aspiration to reason without preconceptions, he argues, is misguided. Ranging across philosophy from Aristotle to Heidegger and Gadamer, Sandel demonstrates that we inherit our "prejudice against prejudice" from the Enlightenment. By detaching reason from habit and common opinion, thinkers such as Bacon, Descartes, and Kant invented prejudice--as we understand it today--as an obstacle to freedom and a failure to think for oneself. The Place of Prejudice presents a powerful challenge to this picture. The attempt to purge understanding of culture and history leads not to truth, Sandel warns, but to shallowness and confusion. A purely detached notion of reason deprives judgment of all perspective, disparages political rhetoric as mere pandering, and denies us the background knowledge we need to interpret literature, law, and the past. In a clear, eloquent voice, Sandel presents instead a compelling case for reasoning within the world.

The Place of Prejudice Reviews

A sweeping, ambitious, original, and provocative work. It takes on not a thinker or a theory, but a way of thinking that represents the achievement of modernity and the mark of intellectual and moral integrity: the capacity to liberate ourselves from prejudice and to see things objectively. Prejudice in fact is inescapable, on this account, and is a necessary starting point for practical reason. This is an ambitious book that makes good on its ambition.--Russell Muirhead, author of Just Work
Adam Sandel's book presents 'the prejudice against prejudice' and then the case against it in a clear and eloquent manner. The case still needs to be made to English-speaking audiences in a way that can be widely understood, and this text can do it. It would serve a great need in today's Anglophone philosophical world.--Charles Taylor, author of A Secular Age
A remarkable, deeply humanizing book... [Sandel] points out that those who claim to have rid themselves of prejudice are, without exception, kidding themselves, even setting themselves up to be more susceptible to prejudice by creating a fictitious realm in which they are immune to it... Today researchers are assembling an ever-longer list of what they consider cognitive biases, which are apparently the product of a jumble of cognitive mechanisms that evolution has snatched up and crammed uncomfortably together. A new philosophical effort is needed to account for the findings of this science, and to challenge its shortcomings. Efforts like the one undertaken in The Place of Prejudice will be vital to this task.-- (06/01/2014)

The book is bold and invigorating. Sandel takes aim at one of the bedrock creeds of Western modernity: that genuine rationality requires the dismissal of all cultural, religious, and other contextual presuppositions--that is, the exodus from 'prejudice' (pejoratively construed). As is well known, Hans-Georg Gadamer in his Truth and Method had famously denounced the modern 'prejudice against prejudice.' Although circulating among some philosophers, Gadamer's challenge was rarely taken to heart by social and political theorists--until Sandel's book...There is a plethora of important insights and valuable situated judgments which readers will be able to savor in the
course of a careful reading of the text... No doubt, the main achievement of the text is the retrieval of prejudgment or pre-understanding as a precondition of knowledge and action.

GOR009695481
The Place of Prejudice: A Case for Reasoning within the World by Adam Adatto Sandel
Adam Adatto Sandel
Used - Very Good
Hardback
Harvard University Press
2014-06-03
288
0674726847
9780674726840
N/A
Book picture is for illustrative purposes only, actual binding, cover or edition may vary.
This is a used book - there is no escaping the fact it has been read by someone else and it will show signs of wear and previous use. Overall we expect it to be in very good condition, but if you are not entirely satisfied please get in touch with us.