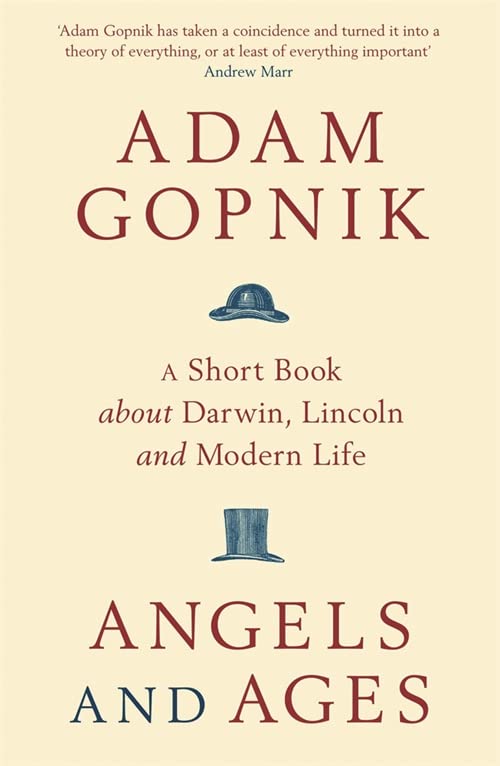 Angels and Ages
by Adam Gopnik

Used Price
$21.49
inc. GST
Free Shipping in Australia
For the first time a brilliant writer shows us that the abolition of slavery and the publication of the Origin of Species, which together created the modern world, share profound intellectual similarities
Reviews:
Trustpilot
Very Good Well Read

Angels and Ages: A short book about Darwin, Lincoln and modern life by Adam Gopnik

'Adam Gopnik has taken a coincidence and turned it into a theory of everything, or at least of everything important ... Outstanding' - Andrew Marr

On February 12th, 1809, two men were born an ocean apart: Abraham Lincoln in a one-room Kentucky log cabin; Charles Darwin on an English country estate. Each would see his life's work transform mankind's understanding of itself. In this bicentennial twin portrait, Adam Gopnik shows how these two giants, who never met, changed the way we think about the very nature of existence, and that their great achievements proceeded from the same source: argument from reason. The revolutions they effected shaped the world we live in, while the intellectual heritage and method that informed their parallel lives has profound implications for our present age.
Filled with little-known stories and unfamiliar characters, Angels and Ages reveals these men in a new, shared light, and provides a fascinating insight into the origins of our modern vision and liberal values.

'Adam Gopnik has taken a coincidence and turned it into a theory of everything, or at least of everything important ... Outstanding' * Andrew Marr *
'Vivid and charming ... Gopnik moves from the personal to the political with ease, and his writing hums with authenticity' * Financial Times *
'Adam Gopnik is a great essayist, with a precise, fastidious, if occasionally mannered style.... His insights are good and the book is informed by the author's profound liberalism' * New Statesman *
'This is the essay every essayist would like to have written...he teases, returns again, holds back punchlines and concludes dense paragraphs with intense little summary bombs... The core of the book, the chemical conversion of coincidence to idea, is the proposition that Darwin and Lincoln both entered a world in which people understood themselves vertically - God above, Hell below...outstanding essay' * Daily Telegraph *
'Gopnik knows well enough that Darwin and Lincoln's shared birth date is a mere accident of history, but he comes as close as anyone can in convincing you otherwise' * New Scientist *

Adam Gopnik has been writing for the New Yorker since 1986. He is a three-time winner of the National Magazine Award for Essays and for Criticism, and the George Polk Award for magazine reporting. From 1995 to 2000 he lived in Paris; he now lives in New York City with his wife and their two children.

GOR002155046
Angels and Ages: A short book about Darwin, Lincoln and modern life by Adam Gopnik
Adam Gopnik
Used - Very Good
Paperback
Quercus Publishing
2010-04-01
224
1849161860
9781849161862
N/A
Book picture is for illustrative purposes only, actual binding, cover or edition may vary.
This is a used book - there is no escaping the fact it has been read by someone else and it will show signs of wear and previous use. Overall we expect it to be in very good condition, but if you are not entirely satisfied please get in touch with us.