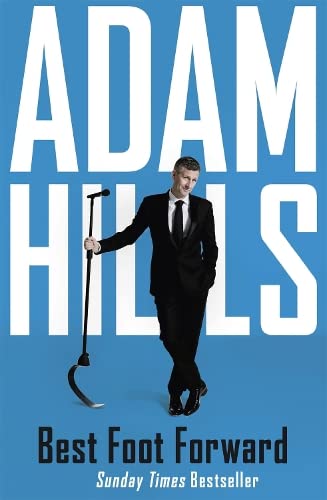 Used Price
$20.99
inc. GST
Free Shipping in Australia
A hilarious and honest collection of stories, thoughts, and tales of a life in comedy from the award-winning comic Adam Hills
Reviews:
Trustpilot
Very Good

Adam Hills is one the UK's best-loved comedians. For thirty years he has been performing stand-up, hosting TV shows and winning the hearts of a nation.

Taking us from the early days of the Sydney Stand Up scene to hosting his own radio show, touring the world and eventually landing on British TV, Best Foot Forward is a story of a life in comedy. Along the way Adam shares some childhood tales, a few backstage blunders and encounters some fairly famous faces - the likes of Whoopi Goldberg, Billy Connolly, and that guy who sang The Macarena. Yes, him.

This is an utterly hilarious and honest collection of stories about Adam's ups and downs in the world of comedy. It's a lesson in following your heart, being positive and discovering that what makes you different also makes you unique.

Adam Hills is an Australian comedian and television presenter.

Known in Australia for hosting the music and quiz show Spicks and Specks and the talk show Adam Hills Tonight, he became known for his combination of positive uplifting comedy and spontaneity - seeing him receive a number of awards and glowing reviews along the way. In 2012, he hosted a one-off series for Channel 4 airing over 2012 London Paralympics called The Last Leg. Now in its 12th series, the show is one of the most popular shows in the UK.

He lives in London with his wife and two daughters. This is his first book.

GOR009872788
Best Foot Forward by Adam Hills
Adam Hills
Used - Very Good
Paperback
Hodder & Stoughton
2019-05-16
368
1473681332
9781473681330
N/A
Book picture is for illustrative purposes only, actual binding, cover or edition may vary.
This is a used book - there is no escaping the fact it has been read by someone else and it will show signs of wear and previous use. Overall we expect it to be in very good condition, but if you are not entirely satisfied please get in touch with us.