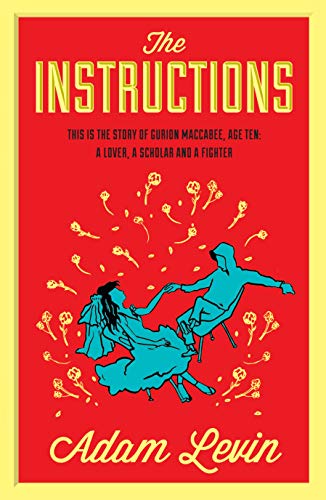 The Instructions
by Adam Levin

Out of Stock
$32.99
inc. GST
Meet Gurion Maccabee. He's ten years old, a lover, a brother, a soldier and the smartest kid you'll ever meet.
Very Good
Only 0 left

The Instructions by Adam Levin

Gurion has been expelled from three Jewish day-schools for acts of violence and messianic tendencies. He ends up in the Cage, a special lockdown program for the most hopeless cases at his new junior high school. But in just four days, from the moment he meets the beautiful Eliza June Watermark to the terrifying Events of November 17, Gurion's search for righteousness sparks a violent, unstoppable rebellion. Driven equally by moral fervour and teenage exuberance, The Instructions is hilarious, troubling, empathetic, monumental, breakneck, romantic and unforgettable.

Mammoth, marvellous . . . Hysterically funny and giddyingly imagined, this is a novel of serious intent . . . Levin is both fascinated by violence and fascinating about it * * Scotsman * *
Manic, articulate, full of passions, courageous in its form and very funny -- George Saunders
Adam Levin's book is the real thing, I think. It appeals to the young readers who like formal invention and ambition . . . But there's also real substance there -- Dave Eggers
Evocative of David Foster Wallace . . . full of death-defying sentences, manic wit, exciting provocations and simple human warmth. * * Rolling Stone * *
The Only Kid Genius Novel You'll Ever Need * * The Millions * *
Dark, funny, and deeply provocative * * Salon * *
Young Adam Levin wowed me with this whip-smart, aching, hilarious novel, starring his own kind of post-modern wise child (ala Seymour Glass) and revolutionary. The ghost of DF Wallace would relish comparisons to this brave new talent. This year's best debut by a country mile. -- Mary Karr
Filled with originalities . . . The Instructions offers numerous pleasures . . . pitch-perfect. And there is a thoughtful political undercurrent about America's post-9/11 recourse to revenge and torture against perceived enemies . . . The Instructions contains much tremendous jesting. * * Guardian * *
This is a life-consuming novel, one that demands to be read feverishly. When it is over, other fiction feels insufficient, the newspaper seems irrelevant . . . If the ultimate message of modernism was unremitting pessimism . . . The Instructions has given the literary genre its long deferred conclusion: Indeed, a day-or four-can serve as a reminder that death looms large for anything living, but there is lot of life to be lived in the interim. * * New York Observer * *
A hysterical, heartfelt journey of self-discovery . . . A book that moves beyond completely transparent influences to reach its own distinct, new, great height. * * Village Voice * *
The Instructions is incredible. It is sweet and vast and the words are everywhere and everywhere is right. -- Ben Brooks
Levin's mammoth, riotous, Talmudic, impossibly excessive yet brilliant, mesmerizing, warmhearted, and hilarious work of chutzpah takes place over four feverish days but encompasses the whole of Israel's battle for existence and the Jewish quest for home and peace. -- Donna Seaman * * Booklist * *
Levin has filled his pages with modern Poloniuses, masters of digression, and with moments rich in fact and feeling - each of which he spends paragraphs unpacking. All the while, the book claims the reader's time, hours and hours of it. Yet miraculously few of its 1,030 pages, which cover four days in Gurion's life, seem extraneous . . . [It's] a chain of interlocking symbols, a charm bracelet of a book . . . It's as though, merely by reading, we are committing an act of faith. In the end, his contradictions leave us - as religion often does - exalted and alienated both. * * San Francisco Chronicle * *
After The Instructions challenges, charms and betrays you, it might just seduce your soul . . . disturbing and romantic and ultimately, heartbreaking, its questions are not easily parsed, even by Gurion's analytic mind. They are the nagging doubts of our own goodness and faith . . . This is a wunderkind's master class . . . An incredible creation of fiction. * * St Louis Post-Dispatch * *
The Instructions is in fact a vital work of-no getting around it-American Jewish literature because it imagines that the genre is indeed through and asks what can be written in its place. * * Tablet magazine * *

Adam Levin's stories have appeared in Tin House, McSweeney's and Esquire. Winner of the 2003 Tin House/Summer Literary Seminars Fiction Contest and the 2004 Joyce Carol Oates Fiction Prize, in 2011 he won the Independent Bookseller's Award and the NYPL Young Lion's Award for THE INSTRUCTIONS, and was a finalist for the Jewish Book of the Year Award. His acclaimed collection of short stories, Hot Pink, was published by McSweeney's this year. He lives in Chicago with his parrot, Gogol.

GOR007083364
The Instructions by Adam Levin
Adam Levin
Used - Very Good
Paperback
Canongate Books Ltd
2012-12-06
1056
0857861387
9780857861382
N/A
Book picture is for illustrative purposes only, actual binding, cover or edition may vary.
This is a used book - there is no escaping the fact it has been read by someone else and it will show signs of wear and previous use. Overall we expect it to be in very good condition, but if you are not entirely satisfied please get in touch with us.