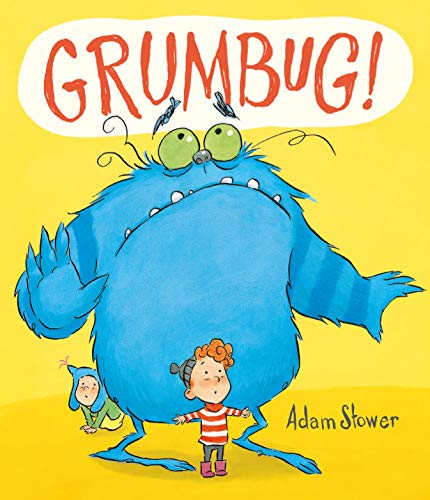 Oliver and Troll face the biggest, meanest, grumpiest troll of all!

Oliver and his best friend Troll run a cafe in the woods. They make the BEST cakes - their troll customers would much rather eat cakes than children! One particularly busy day in the cafe, Oliver's sister Dolly disappears, so Oliver and Troll set off to find her. Their search takes them up Munch Mountain, where the biggest, meanest and grumpiest troll in the world lives. Oliver doesn't believe all the scary rumours, but Troll's not so sure . . .
It's great to see the characters from Troll and the Oliver return for a second story about hungry trolls and cake. At the end of The Troll and the Oliver, Oliver and Troll have gone into business together running a cafe selling cake to hungry trolls. But when Oliver's little sister disappears up Munch Mountain - where the Grumbug lives - he and Troll set off after her, taking a special supply of cake with them. Children will love following the clues in the story that lead Oliver towards his sister. Sure enough, she is at the top of Munch Mountain - but is the Grumbug really as big and as green and as mean as people think...? Once again Adam Stower excels at juxtaposing the text and the images so that the child reader knows more about what is going on than some of the characters in the story - they will delight in pointing out the clues to the existence of a rather large creature in the mountains, even if Oliver doesn't believe it exists... The rather wonderful array of trolls in the story could also be used to encourage children to create their own troll or other cake-guzzling creature! -- Reading Zone * Reading Zone *
Extraordinary characters, wonderful illustrations with bright, bold colours fill the pages of this picture book. Children will love it and they will all wish their best friend was a troll. -- James Syner * Magpiethat *
Yippee! It's a return visit from my favourite Troll and of course, Oliver. This time however, it's Oliver's small sister, Dolly who features large - well not that large - in this story. At the outset we find Oliver and his best pal, Troll hard at work in their cafe: a cafe run exclusively for trolls (of the cake-only-eating variety I hasten to add.) So busy are the friends that they fail to notice young Dolly heading out through the open door. Some time later her absence is discovered and a hunt ensues. An exhaustive search of the cafe reveals no Dolly so Oliver declares an outside search is needed. "BEWARE! Steer clear of Munch Mountain - you know who lives there!" warns a wise old troll speaking of ... All manner of dreadful descriptions issue forth from other trolls but Oliver is undaunted and armed with cake and alone save his trusty pal Troll, he sallies forth on a Dolly hunt. Into the forest they go ... Oliver at least, heedless of the clues around them - until they find themselves at the foot of Munch Mountain. Up, up they go and at the top they find ... And she's not alone; but surely that creature cannot be the BIGGEST, MEANEST, GRUMPIEST and GREENEST troll of all? Can it ...? Erm, maybe not; but nobody wants to spoil a super-dooper story so let's bid our cake-eating crew a hearty farewell and leave them to enjoy their repast ... and I'll just add Oliver's parting words "WE NEED BIGGER CAKE!" Amen to that: and more servings please, Adam Stower. That one was a decidedly tasty offering. The recipe's pretty much as before with occasional textual forays into rhyme and Stower's wonderful way of showing not telling with his witty illustrations. My four to nine year old audiences have relished every serving and demanded immediate second helpings. -- Jill Bennett * Red Reading Hub *
Gleeful story, gorgeous illustrations - 'Grumbug' is great! * Nick Sharratt *
It's full on brilliant, beautifully drawn and HILARIOUS. I 100% think that it's one of my very favourite picture books. SO good! * Alex T.Smith *
My daughter had to turn the pages for me. I was hiding behind the duvet, too terrified to meet the meanest, greenest troll of all...GRUMBUG! * Jonny Duddle *
Adam Stower's Grumbug is a delight. A lightly told story with a nicely balanced degree of suspense to keep the reader engaged throughout the book, all told with witty and expressive illustrations, dashed off with consummate graphic skill. * John Vernon Lord *
Adam's pictures make me smile and warm my heart. Grumbug is a delight! * Chris Riddell *
Adam Stower has illustrated many books for children, including Bottoms Up!, winner of the Red House Picture Book Award. His own books include Slam!, Silly Doggy! and Naughty Kitty!, both of which were longlisted for the Kate Greenaway.
GOR007103339
9781783700523
1783700521
Grumbug by Adam Stower
Adam Stower
Used - Very Good
Paperback
Templar Publishing
2015-06-01
40
N/A
Book picture is for illustrative purposes only, actual binding, cover or edition may vary.
This is a used book - there is no escaping the fact it has been read by someone else and it will show signs of wear and previous use. Overall we expect it to be in very good condition, but if you are not entirely satisfied please get in touch with us
Trustpilot