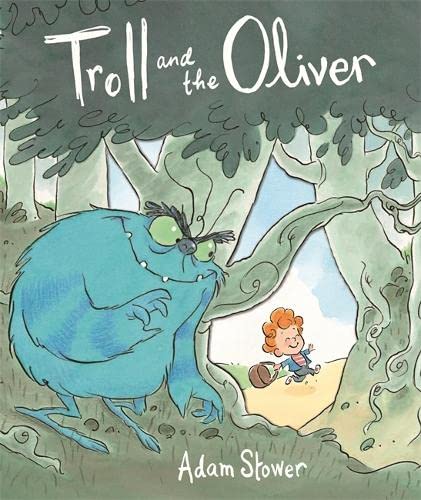 Troll and the Oliver by Adam Stower

Meet a little boy called Oliver - and the troll who wants to eat him.

Troll and the Oliver by Adam Stower

Every day, Oliver goes to the shops and every day the troll tries to eat him. Luckily Oliver is too fast, too sneaky, or just too plain clever to be caught. But when things get quiet, and Oliver thinks he has won - CHOMP! He gets eaten! Unfortunately for the troll, Olivers don't taste very nice. So he spits him out and discovers that Oliver has been buying ingredients to make cakes - and trolls LOVE cakes!
As monster books go this is pretty much perfect... the double-pumped payoff is so utterly, deliciously satisfying that for a tiny, tiny moment your little one will sit agog. * Read it Daddy *
"Excellent clever plot, amusing detailed illustrations and a pleasing twist at the end." -- Peters eGazette * Peters eGazette *
Every day, Troll tries to eat the Oliver but the Oliver is too fast, too sneaky, or just too plain clever to be caught. But when things get quiet, and Oliver thinks it's safe when suddenly and unexpectedly, Troll is back and CHOMP! But Olivers don't taste very nice so the Oliver is safe. And the unexpected ending is CAKE! And there's even a recipe to try out. Troll is wonderfully depicted with the most amazingly expressive eyebrows you have ever seen! And Oliver has a very cheeky little face! I like the cut out on the cover and this will intrigue children. Enormous fun. -- Parents in Touch * Parents In Touch *
If your name happens to be Oliver, beware. There's a large, blue, lumbering troll around and there's nothing this sneaky looking creature would like better than to eat you for lunch. Said troll finds Oliver catching a very tricky business; somehow, the Oliver in question - a cheeky little red head - always manages to elude him, dashing hither and thither and then vanishing suddenly. So, by the time spring comes around there is one very grumpy, hungry troll who's not had a single mouthful of Oliver stew, or Oliver anything else for that matter. Oliver of course is still roaming free; indeed he manages to go shopping without even a sight of his enemy. Back home and feeling full of the joys of living, he concludes that his old adversary has finally given up the chase and sets about baking some celebratory cakes. But has he? Leap! CHOMP! BLEEEUGHHHH! Not quite the delicacy he'd long been anticipating; Olivers taste revolting. One disappointed Troll. Wait a minute ... tick tock PING! What is that wonderful aroma emanating from Oliver's oven? Mmmmmm! Cake - Guess what Troll's new favourite food is. I love Adam Stower's books and this one is particularly satisfying. Superb characters, portrayed with panache, and a clever, funny storyline. There is even a page from 'Trolliver's Cookbook' giving full instructions on how to create Troll Cupcakes. Repeat readings are sure to be the order of the day here. -- Jill r bennett * Red Rading Hub *
It's common knowledge that all Trolls love eating 'Olivers' but this particular Oliver is a troll-evading genius. As poor Troll becomes increasingly frustrated by the on-going game of cat and mouse, he hatches a cunning plan. But catching an Oliver isn't quite as easy as it looks. This book contains a brilliant fold-out surprise and cupcakes! Adam Stower is a treasure, and his exquisite illustrations are a work of subtle magnificence. -- WRD * WRD Books *
Adam Stower has illustrated many books for children, including Bottoms Up!, winner of the Red House Picture Book Award. His own books include Slam!and Silly Doggy! and Naughty Kitty!, both of which were longlisted for the Kate Greenaway.
GOR007620664
9781848773523
1848773528
Troll and the Oliver by Adam Stower
Adam Stower
Used - Very Good
Hardback
Templar Publishing
2013-09-01
40
Commended for Picture Book - Sheffield Children's Book Awards 2014 (UK)
Book picture is for illustrative purposes only, actual binding, cover or edition may vary.
This is a used book - there is no escaping the fact it has been read by someone else and it will show signs of wear and previous use. Overall we expect it to be in very good condition, but if you are not entirely satisfied please get in touch with us
Trustpilot