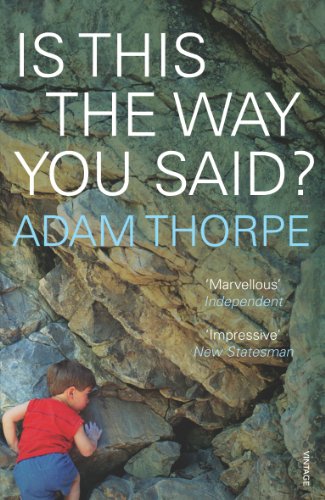 Is This The Way You Said?
by Adam Thorpe

In Stock
$10.99
+10% GST
Celebrated as a novelist of breathtaking historical range and depth, Adam Thorpe is also an accomplished and celebrated writer of short fiction, and the stories collected here show his deftness with character, his enormous versatility of voice.
Very Good
Only 3 left

Is This The Way You Said? Summary

Is This The Way You Said? by Adam Thorpe

Celebrated as a novelist of breathtaking historical range and depth, Adam Thorpe is also an accomplished and celebrated writer of short fiction, and the stories collected here show his deftness with character, his enormous versatility of voice. In the title story, an expectant first-time novelist meets the publisher who has asked him to lunch, only to find himself drawn, unwittingly and inexorably, into a terrible personal tragedy. In 'The Concert Interval' Rob, an orchestral tympanist, sees his life crumble over the half-time coffee and sandwiches. In 'Heavy Shopping' a business executive is called in the middle of an important conference in Scotland with the news that his wife has given birth prematurely; his inability to cope with the resulting divided loyalties, and the way he deals with his own passive indecisiveness, reveals the terrifying emotional vacuum in his life. Exquisitely written, these stories breathe life into their characters, exposing their deepest desires, their catastrophic fears, their perilous frailty in the face of the responsibilities they carry; they are the work of one of Britain's most important writers, working at the height of his powers.

Is This The Way You Said? Reviews

"In Is This The Way You Said? we see the perfection of deprecation, spurred by wit, watered by pity, fed by observation. It's marvellous" -- Murrough O'Brien * Independent *
"Full of humour and warmth, this is an impressive, at times brilliant, work" -- Alexander Larman * New Statesman *
"Thorpe's precise prose never wastes a word; he inhabits a variety of complex characters effortlessly and is extremely funny and moving by turns. A real treat" -- John Harding * Daily Mail *
"What raises both story and collection to the highest level is the combination of Thorpe's extraordinarily keen ear, sharp humour and a remarkable, direct prose that is not only suited to the way his people think, but also provides the perfect foil to those moments of tentative poetry that spark and burn from time to time in even the dullest of English lives" -- John Burnside * Guardian *
"There is grace and strength to Adam Thorpe's writing that reminds me of Tai Chi... Beautifully observed tales" -- Jennie Renton * Sunday Herald *

Adam Thorpe was born in Paris in 1956. His first novel, Ulverton, appeared in 1992, and he has published two books of stories, six poetry collections, and nine further novels, most recently Flight (2012). www.adamthorpe.net

GOR003246034
Is This The Way You Said? by Adam Thorpe
Adam Thorpe
Used - Very Good
Paperback
Vintage Publishing
2007-06-07
288
0099479893
9780099479895
N/A
Book picture is for illustrative purposes only, actual binding, cover or edition may vary.
This is a used book - there is no escaping the fact it has been read by someone else and it will show signs of wear and previous use. Overall we expect it to be in very good condition, but if you are not entirely satisfied please get in touch with us.