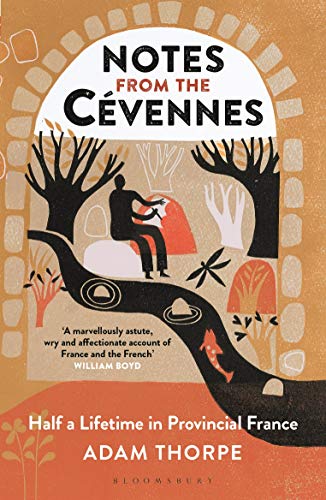 Notes from the Cevennes
by Adam Thorpe

Notes from the Cevennes Summary

Notes from the Cevennes: Half a Lifetime in Provincial France by Adam Thorpe

Adam Thorpe's home for the past 25 years has been an old house in the Cevennes, a wild range of mountains in southern France. Prior to this, in an ancient millhouse in the oxbow of a Cevenol river, he wrote the novel that would become the Booker Prize-nominated Ulverton, now a Vintage Classic. In more recent writing Thorpe has explored the Cevennes, drawing on the legends, history and above all the people of this part of France for his inspiration. In his charming journal, Notes from the Cevennes, Thorpe takes up these themes, writing about his surroundings, the village and his house at the heart of it, as well as the contrasts of city life in nearby Nimes. In particular he is interested in how the past leaves impressions - marks - on our landscape and on us. What do we find in the grass, earth and stone beneath our feet and in the objects around us? How do they tie us to our forebears? What traces have been left behind and what marks do we leave now? He finds a fossil imprinted in the single worked stone of his house's front doorstep, explores the attic once used as a silk factory and contemplates the stamp of a chance paw in a fragment of Roman roof-tile. Elsewhere, he ponders mutilated fleur-de-lys (French royalist symbols) in his study door and unwittingly uses the tomb-rail of two sisters buried in the garden as a gazebo. Then there are the personal fragments that make up a life and a family history: memories dredged up by `dusty toys, dried-up poster paints, a painted clay lump in the bottom of a box.' Part celebration of both rustic and urban France, part memoir, Thorpe's humorous and precise prose shows a wonderful stylist at work, recalling classics such as Robert Louis Stevenson's Travels with a Donkey in the Cevennes.

Notes from the Cevennes Reviews

In an altogether different class ... beautifully written, full of wisdom about the balance struck by humanity and the natural world ... Adam Thorpe, a self-described "curator of time", has written a grand little book. I might have added that no holidaymaker this year in France, or further afield, should be without it. But why wait until July or August? Don't postpone the treat. Buy now; this book is a real joy. * The Tablet *
A marvellously astute, wry and affectionate account of France and the French - mercifully free of whimsy - and, moreover, written in pitch-perfect English prose. A delight. * William Boyd *
Part history and part memoir, Notes from the Cevennes is a marvellous evocation of the forgotten Languedoc, and an affectionate portrait of a country and a people. * Sigrid Rausing, Editor of Granta *
Thorpe continues ... quietly wonderful. Though (and perhaps because) Thorpe lives in France, he is alert to every English linguistic twitch, every slippery folk-meme. He's a writer's writer. * Hilary Mantel (on Thorpe's novel Missing Fay; TLS Books of the Year, 2017) *
A powerful story of cooperation and conflict, both between ourselves and Nature. Living in two places, the ancient pastoral retreat of the Cevennes, and the Roman cosmopolitanism of Nimes, Adam has all the gifts of novelist, correspondent, historian and poet. * Colin Greenwood, Radiohead *
His novels are concerned with how the past and the present, reality and fiction elide into each other, particularly through landscape; and Thorpe, in this series of tightly controlled, involving vignettes, finds evidence of this everywhere he looks ... Gleaming with polished insights, this sensitive book is both a warning, plea and salutary reminder that even the tiniest action affects the universal. France profonde, indeed. * Spectator *
Erudite and beguiling * The Times *
Thorpe has dizzying range as well as style * Daily Mail *
[A] deeply engaging book, part chatty memoir, part profound perception of the evidence of previous human existences ... He has, in short, lived a life to which he was not born but which he has taken up and made his own, something many people dream about but few are able to emulate * Times Literary Supplement *
Thorpe's memoir is not part of any herd. Nor does it belong in the fast-and-loose category of potboilers about swapping English life for continental idylls ... It is erudite, firmly embedded in its own soil and yet evasive ... affectionate, appreciative and perceptive * Observer *
Beautifully written and produced, a pure pleasure: learned and attentive and rich in description and full of humour that is genuinely affectionate without being remotely patronising * Irish Times *
By turns comic and pensive, Notes from the Cevennes is an absorbing and beautifully composed collection of vignettes, recording Adam Thorpe's encounters, adventures and meditations over half a lifetime in France ... Mr Thorpe captures so well the dark history of France, the conflict of religion, politics and land * Country Life *
This absorbing book is written in prose as bright and bracing as the waters of the rivers in which Thorpe loves to swim. Despite the warts-and-all picture, it made me want to pack my bags and head south. * Literary Review *
Thorpe allows a sense of folk magic to permeate, and his characters feel rustic in a timeless way because he transmits a real appreciation of the wild and how humans justify our interactions with other beasts ... A gentle homage to rural life. * New Statesman *

Adam Thorpe is a bestselling novelist, non-fiction writer and poet. His recent book On Silbury Hill (2014) was Radio 4's Book of the Week and received wide praise. He has published many novels, including Ulverton (1992), now a Vintage Classic, and numerous collections of poetry. Adam was born in France, brought up in India, Cameroon and England and now lives in southern France, between the Cevennes and Nimes.

GOR009933753
Notes from the Cevennes: Half a Lifetime in Provincial France by Adam Thorpe
Adam Thorpe
Used - Very Good
Paperback
Bloomsbury Publishing PLC
2019-05-16
256
1472966317
9781472966315
N/A
Book picture is for illustrative purposes only, actual binding, cover or edition may vary.
This is a used book - there is no escaping the fact it has been read by someone else and it will show signs of wear and previous use. Overall we expect it to be in very good condition, but if you are not entirely satisfied please get in touch with us.