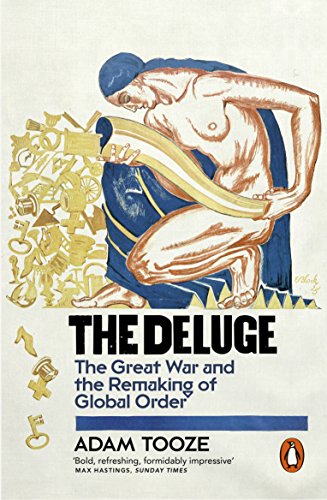 The Deluge
by Adam Tooze

In Stock
$31.99
inc. GST
On the centenary of the outbreak of the First World War, this book offers an explanation of why the war's legacy continues to shape our world. It tells a radical, new story of the struggle for global mastery from the battles of the Western Front in 1916 to the Great Depression of the 1930s.
Very Good
Only 3 left

The Deluge: The Great War and the Remaking of Global Order 1916-1931 by Adam Tooze

WINNER OF THE LOS ANGELES TIMES PRIZE FOR HISTORY

FINANCIAL TIMES AND NEW STATESMAN BOOKS OF THE YEAR 2014

On the centenary of the outbreak of the First World War, Deluge is a powerful explanation of why the war's legacy continues to shape our world - from Adam Tooze, the Wolfson Prize-winning author of The Wages of Destruction

In the depths of the Great War, with millions of dead and no imaginable end to the conflict, societies around the world began to buckle. As the cataclysmic battles continued, a new global order was being born.

Adam Tooze's panoramic new book tells a radical, new story of the struggle for global mastery from the battles of the Western Front in 1916 to the Great Depression of the 1930s. The war shook the foundations of political and economic order across Eurasia. Empires that had lasted since the Middle Ages collapsed into ruins. New nations sprang up. Strikes, street-fighting and revolution convulsed much of the world. And beneath the surface turmoil, the war set in motion a deeper and more lasting shift, a transformation that continues to shape the present day: 1916 was the year when world affairs began to revolve around the United States.

America was both a uniquely powerful global force: a force that was forward-looking, the focus of hope, money and ideas, and at the same time elusive, unpredictable and in fundamental respects unwilling to confront these unwished for responsibilities. Tooze shows how the fate of effectively the whole of civilization - the British Empire, the future of peace in Europe, the survival of the Weimar Republic, both the Russian and Chinese revolutions and stability in the Pacific - now came to revolve around this new power's fraught relationship with a shockingly changed world.

The Deluge is both a brilliantly illuminating exploration of the past and an essential history for the present.

Bold and ambitious . . . probably the best of the current books about the First World War * Observer *
A remarkable new synthesis which draws on [Tooze's] two particular areas of expertise, Eurasia and especially Germany, and the global financial system revolving around London ... the great strength of his book is that he invites us to look at familiar events in unfamiliar ways ... Tooze's account brims with contemporary resonances ... He is too good a historian, however, to turn this into a simple argument for Keynesian deficit financing ... the general public and policymakers alike will - must! - turn to Adam Tooze for instruction -- Brendan Simms * Tablet *
It is particularly refreshing to read Adam Tooze's book ... it confirms his stature as an analyst of hugely complex political and economic issues ... Tooze's book covers a huge geographical sweep ... he shows himself a formidably impressive chronicler of a critical period of modern history, unafraid of bold judgements -- Max Hastings * Sunday Times *
Adam Tooze's masterly book should be required reading for anyone who wants to truly understand the significance of the war ... Extensively researched and written with exemplary clarity, this work is as monumentally ambitious as its subject ... his powers of description and analysis range across all inhabited continents ... this is a valuable look at the ways in which the years after the war came to define the rest of the 20th century * BBC History Magazine *
Interesting, engaging and very readable ... Underpinning this account is an impressive facility with numbers and an ability to analyse them that is increasingly rare among historians nowadays ... he has also delivered, for the first time, ...a clear and compelling rationale as to why it is actually worth going back and looking at the era of the First World War at this particular moment in time ... The Deluge reminds us, then, why we write history and why we should read it * Literary Review *
Tooze made his name with The Wages of Destruction . . . His study of the post-1918 era is equally impressive, explaining why the US and its allies, having defeated Germany, were unable to stabilize the world economy and build a collective security system in Europe -- Tony Barber * Financial Times BOOKS OF THE YEAR *

Adam Tooze is Barton M. Biggs Professor of History and Director of International Security Studies at Yale University. He taught for many years at the University of Cambridge. His last book, The Wages of Destruction, was universally acclaimed as one of the most important books written on the Third Reich. It was shortlisted for the Duff Cooper Prize and won both the Longman-History Today Book of the Year Prize and the Wolfson Prize for History.

GOR005537343
The Deluge: The Great War and the Remaking of Global Order 1916-1931 by Adam Tooze
Adam Tooze
Used - Very Good
Paperback
Penguin Books Ltd
2015-03-05
672
0141032189
9780141032184
N/A
Book picture is for illustrative purposes only, actual binding, cover or edition may vary.
This is a used book - there is no escaping the fact it has been read by someone else and it will show signs of wear and previous use. Overall we expect it to be in very good condition, but if you are not entirely satisfied please get in touch with us.