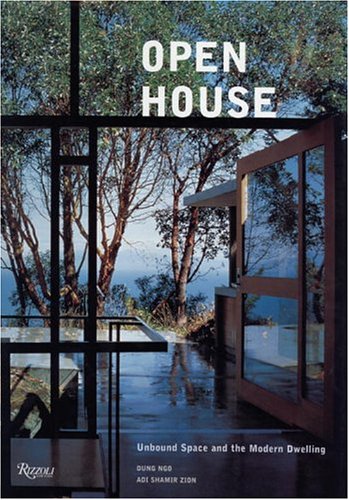 At the beginning of the twentieth century, a new vision of architectural space was born, made possible to new construction techniques that eliminated the need for interior load-bearing walls. Developed concurrently with Picasso's cubist paintings and Einstein's theories of quantum physics, the new architecture manifested itself most emblematically with the open plan: physically and visually free-flowing spaces. Modern architects broke free from spatial constraints and traditional limits to design houses that were unbound, dynamic, and open.
The freedom afforded by the open plan, however, emcompassed philosophical and social freedom as well as physical. The first half of this book explores the spatial and social evolution of the open plan. From Frank Lloyd Wright's early prairie houses to Mies van der Rohe's universal structural grid, architects eliminated self-contained rooms, combined living spaces and discarded traditional social and familial constraints to open up the house. In the 1950's, especially in California, residential architecture began to blur the distinction between inside and outside. Windows were replaced by glass walls in houses designed by Rudolf Schindler, Richard Neutra, and Oscar Niemeyer, offering their inhabitants casual, free-flowing floor plans and seamless integration of exterior and interior spaces.
Today, the free plan, and in turn the open house, has taken yet another turn as a new generation of architects takes up the reigns of modernism. As seen in diverse contemporary projects such as Shigeru Ban's minimalist retreat in Japan, or LOT/EK's industrial vernacular duplex in New York, the modern open plan house is clearly alive and well. Twelveprojects by today's leading international architects, including Pritzker Prize winner Glen Murcutt, Patkau Architects, Ben van Kerkel and Caroline Bos, Wes Jones, Daly Genik, and Kuth/Ranieri are showcased in full-page color photographs to illustrate the enduring relevance and formal variety of the open house.

GOR005368148
Open House by Adi Shamir Zion
Adi Shamir Zion
Used - Very Good
Hardback
Rizzoli International Publications
2002-10-18
224
0847824721
9780847824724
N/A
Book picture is for illustrative purposes only, actual binding, cover or edition may vary.
This is a used book - there is no escaping the fact it has been read by someone else and it will show signs of wear and previous use. Overall we expect it to be in very good condition, but if you are not entirely satisfied please get in touch with us.