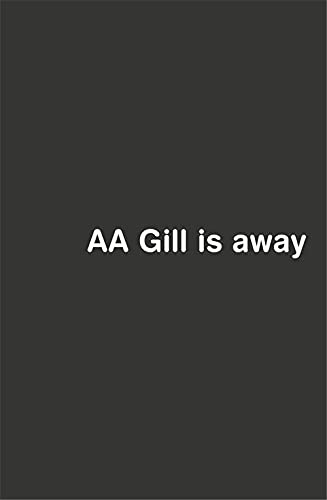 AA Gill is Away
by Adrian Gill

In Stock
16,99 $
inc. GST
A collection of travel writing by Britain's funniest and most feared critic.
Very Good Good Well Read
17 in stock

AA Gill is Away Summary

AA Gill is Away by Adrian Gill

'Theatre, food, refugees: in Adrian's writing they're all linked up ... If you haven't read his book AA GILL IS AWAY, read it now. It was when he was away that he was at his best' Stephen Daldry

A. A. Gill was probably the most read columnist in Britain. Every weekend he entertained readers of the SUNDAY TIMES with his biting observations on television and his unsparing, deeply knowledgeable restaurant reviews. Even those who objected to his opinions agree: his writing is hopelessly, painfully funny. He was one of a tiny band of must-read journalists and it was always a disappointment when the words 'A.A. Gill is away' appeared at the foot of his column. This book is the fruit of those absences: twenty-five long travel pieces that belie his reputation as a mere style-journalist and master of vitriol: this is travel writing of the highest quality and ambition.

AA Gill is Away Reviews

His reporting here is spot-on: clear-eyed, informative and compassionate ... His work is always ... surprising, original, stimulating and, for that reason, always worth reading -- Lynn Barber * SUNDAY TELEGRAPH *
It was when he was away that he was at his best ... His walkabouts around the world were driven by an insatiable curiosity to explore and acquaint himself with cultures he knew nothing about, to rejoice in the diversity of the extraordinary world we live in, and to use his writing as a tool for change ... If A. A. Gill is to be away for a while, we should all take up the baton he has left behind and make sure we are richer, not poorer, for his absence -- Stephen Daldry
'In this collection of twenty-four accounts of trips abroad he comes across as both funny and compassionate' * DAILY EXPRESS *
'Imagine Evelyn Waugh reborn as one of Nick Hornby's endearingly superficial protagonists, and you have London's Sunday Times television and restaurant critic Gill: droll, astute, irritable, irritating and always cleaver-sharp . . . it's his bald foreignness that makes him such a skilled marksman. That, and the fact that he himself is such an original' * PUBLISHERS WEEKLY *
'Sometimes shocking, usually smart, always entertaining' * KIRKUS REVIEWS *

GOR001209737
AA Gill is Away by Adrian Gill
Adrian Gill
Used - Very Good
Paperback
Orion Publishing Co
2003-03-06
336
0753816814
9780753816813
N/A
Book picture is for illustrative purposes only, actual binding, cover or edition may vary.
This is a used book - there is no escaping the fact it has been read by someone else and it will show signs of wear and previous use. Overall we expect it to be in very good condition, but if you are not entirely satisfied please get in touch with us.