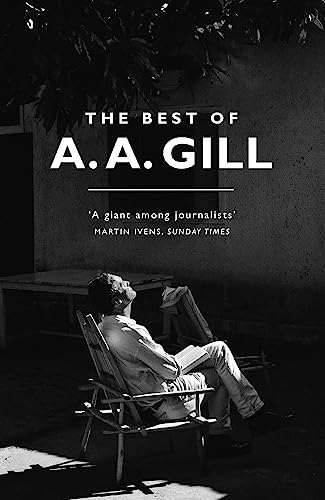 The Best of A. A. Gill
by Adrian Gill

In Stock
$20.49
inc. GST
A selection of the very best writing by A. A. Gill, 'by miles the most brilliant journalist of our age' (Lynn Barber).
Very Good Good
8 in stock

The Best of A. A. Gill Summary

The Best of A. A. Gill by Adrian Gill

For over twenty years, people turned to A. A. Gill's columns every Sunday - for his fearlessness, his perception, and the laughter-and-tear-provoking one-liners - but mostly because he was the best. 'By miles the most brilliant journalist of our age', as Lynn Barber put it. This is the definitive collection of a voice that was silenced too early but that can still make us look at the world in new and surprising ways.

In the words of Andrew Marr, A.. A. Gill was 'a golden writer'. There was nothing that he couldn't illuminate with his dazzling prose. Wherever he was - at home or abroad - he found the human story, brought it to vivid life, and rendered it with fierce honesty and bracing compassion. And he was just as truthful about himself. There have been various collections of A. A. Gill's journalism - individual compilations of his restaurant and TV criticism, of his travel writing and his extraordinary feature articles. This book showcasesthe very best of his work: the peerlessly funny criticism, the extraordinarily knowledgeable food writing, assignments throughout the world, and reflections on life, love, and death. Drawn from a range of publications, including the Sunday Times, Vanity Fair, Tatler and Australian Gourmet Traveller, The Ivy Cookbook and his books on England and America, it is by turns hilarious, uplifting, controversial, unflinching, sad, funny and furious.

The Best of A. A. Gill Reviews

I can't think of a writer whose style so exactly replicated their conversation as A. A. Gill. Reading his weekly dispatches was just like being with him in person, which is why so many readers took his death late last year very personally. People - even people who had never met him - felt they'd lost their funniest, most outrageous chum. Opening a paper without an article by him is like going to your store cupboard and finding that there's no chilli or salt: everything is blander without him. Two collections which came out this year, Lines in the Sand and The Best of A A. Gill, showcase him at his finest. Adrian showed incredible courage, wit and generosity of heart during his final weeks. Once my husband, always my friend, he is irreplaceable, on and off the page -- Cressida Connolly * The Spectator Books of the Year *
Everything by A. A. Gill was dictated down the phone to obliging assistants, who found him "charming and hilarious", according to Celia Hayley, editor of this posthumous collection of articles ... The fact the text was spoken aloud, performed for an audience, gives the prose its distinctive baroque theatrical flourish. Gill was like a fruity actor, preening and posturing in the limelight, or as he'd have put it, "yearning and longing, exclaiming and declaiming, biding and abiding". His brain was like a thesaurus, so Gill didn't so much construct sentences as compose lists ... The spirits always rose when you opened a paper with him in it, as his affectations and provocations were a tonic. How bland everyone else is in comparison ... Gill's peacockery is much missed, much needed. "That's rather good, isn't it?" he'd chortle to his copytaker, modesty never in his armoury. Indeed, much of it was -- Roger Lewis * The Times
Book of the Week *
Anyone who writes of a restaurant visit that "it was like eating in an underpass at the end of the world", certainly had something and The Best of A. A. Gill is the pick of the late writer's uniformly excellent journalism, ranging across food, television, travel and family * Choice *
[Gill] is breathtakingly rude, sharply perceptive and brilliantly funny all at once. But it isn't all frothing invective. Gill's travel writing ... is gripping and moving in equal measure ... Gill's vivid reporting transports you right into the centre of wherever he is and will not let you go ... [A] must-read collection of brilliant writing -- Mernie Gilmore * DAILY EXPRESS *

Few writers could compete with the late, great A. A. Gill. Lap up his wonderful wit, merciless excoriations
and lyrical musings in this collection of his very best journalism, covering everything from eating
turtle to Iraq, dyslexia and Good Morning Britain

GOR009666502
The Best of A. A. Gill by Adrian Gill
Adrian Gill
Used - Very Good
Paperback
Orion Publishing Co
2018-11-13
416
1474607756
9781474607759
N/A
Book picture is for illustrative purposes only, actual binding, cover or edition may vary.
This is a used book - there is no escaping the fact it has been read by someone else and it will show signs of wear and previous use. Overall we expect it to be in very good condition, but if you are not entirely satisfied please get in touch with us.