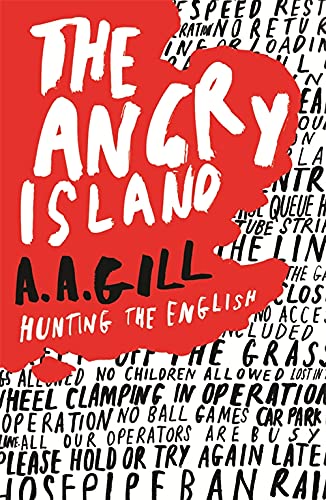 The Angry Island
by Adrian Gill

In Stock
$16.49
inc. GST
Foreigner Adrian Gill (a Scot) goes in search of the essence of England and the English
Very Good Good Well Read
12 in stock

The Angry Island: Hunting the English by Adrian Gill

The English are naturally, congenitally, collectively and singularly, livid much of the time. In between the incoherent bellowing of the terraces and the pursed, rigid eye-rolling of the commuter carriage, they reach the end of their tethers and the thin end of their wedges. They're incensed, incandescent, splenetic, prickly, touchy and fractious. They sit apart on their half of a damply disappointing little island, nursing and picking at their irritations.

Perhaps aware that they're living on top of a keg of fulminating fury, the English have, throughout their history, come up with hundreds of ingenious and bizarre ways to diffuse anger or transform it into something benign. Good manners and queues, roundabouts and garden sheds, and almost every game ever invented from tennis to bridge. They've built things, discovered stuff, made puddings, written hymns and novels, and for people who don't like to talk much, they have come up with the most minutely nuanced and replete language ever spoken - just so there'll be no misunderstandings. In this hugely witty, personal and readable book, A.A. Gill looks anger and the English straight in the eye.

'In a series of fascinating essays, Gill reveals there is a swell of suppressed anger in the English . . . Much of it is extremely funny, the reader is left with the queasy question: what if he is right?' * SUNDAY TIMES *
'An entertaining polemic . . . A thought-provoking, some would say overdue, book that challenges the English self-image of genteel reserve' * CHOICE *
'His prose floats like a butterfly and stings like a bee and, just when you least expect it, lands a deft and lethal blow beneath the belt' -- Terence Blacker * SUNDAY TIMES *
'The author is on typically quick-witted form' -- Jim Blackburn * WANDERLUST *
'It annoys, arouses feelings and forces one to confront received opinions. Whether one sides with it or not, one can admire the zest of the writing and applaud its splendid lack of political correctness' -- Beryl Bainbridge * MAIL ON SUNDAY *
'He writes beautifully. His chapter on war memorials should be a set text, his defence of political correctness is bold and true, and he really nails the philosophy of the queue' -- Peter Watts * TIME OUT *
'He's as much sentimentalist as satirist - listen to him, some time, eulogising stalking in Scotland - and, as everyone knows, he's very, very funny' * GQ *
'The book not only evolves into a surprisingly evocative meditation on England and the English, but it also showcases Mr. Gill's gifts as a writer of rude invective, hyperbolic description and splenetic asides - a writer who seems to have inhaled the prose styles of Auberon Waugh, Clive James and Alexander Theroux and come up with an idiosyncratic voice all his own' -- Michiko Kakutani * NEW YORK TIMES *

GOR001288419
The Angry Island: Hunting the English by Adrian Gill
Adrian Gill
Used - Very Good
Paperback
Orion Publishing Co
2006-07-26
256
075382096X
9780753820964
N/A
Book picture is for illustrative purposes only, actual binding, cover or edition may vary.
This is a used book - there is no escaping the fact it has been read by someone else and it will show signs of wear and previous use. Overall we expect it to be in very good condition, but if you are not entirely satisfied please get in touch with us.