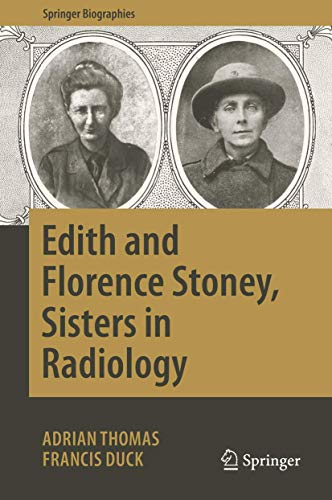 Edith and Florence Stoney, Sisters in Radiology by Adrian Thomas

This book explores the lives and achievements of two Irish sisters, Edith and Florence Stoney, who pioneered the use of new electromedical technologies, especially X-rays but also ultraviolet radiation and diathermy.

Edith and Florence Stoney, Sisters in Radiology by Adrian Thomas

This book explores the lives and achievements of two Irish sisters, Edith and Florence Stoney, who pioneered the use of new electromedical technologies, especially X-rays but also ultraviolet radiation and diathermy. In addition, the narrative follows several intertwined themes as experienced by the sisters during their lifetimes. Their upbringing, influenced by their liberal-minded scientist father, set the tone for both their lives. Irish independence fractured their family heritage. Their professional experiences, fulfilling for Florence as a qualified doctor but often frustrating for Edith as a Cambridge-educated scientist, mirrored those of other aspiring women during this period, when the suffragist movement expanded and women's lobby groups were formed. World War I created an environment in which their unusual specialist knowledge was widely needed, and the sisters' war experiences are carefully examined in the book. But ultimately this is the extraordinary story of two independent but closely bonded sisters and their abiding love and support for one another.
"This is a comprehensive, well referenced biography of the Stoney sisters. ... The sisters were remarkable women who deserve to be better remembered and this scholarly, well researched biography is a tribute to their important legacy and the authors deserve to be congratulated for this fine contribution to the radiology history literature." (Arpan K Banerjee, RAD Magazine, March, 2020)
"It will be of interest to a great many readers with very different interests, from those searching for little known yet significant facts to those who understand the pleasure of devouring the biography of two lives intensively lived. ... this book succeeds, thanks to the abundant documentation, the connection of the Stoneys' biography to world events, and the clear writing, resulting in a captivating biography that goes beyond the restricted definition of the genre." (Alain Touwaide, Doody's Book Reviews, December 20, 2019)
Adrian Thomas has been fascinated by history ever since his junior school days. He developed his interest in the history of radiology when he was a junior doctor at the Hammersmith Hospital in the 1980s. He has written many articles and book chapters and has co-authored books on the history of radiology, including a biography of Sir Godfrey Hounsfield, the inventor of X-ray computed tomography. Adrian is secretary and past-chair of the International Society for the History of Radiology. He is honorary historian at the British Institute of Radiology, and lectures on the history of radiology for the Diploma of the History of Medicine of the Society of Apothecaries. He is past-president of the British Society for the History of Medicine. He is visiting professor at Canterbury Christ Church University, and has a long-standing interest in role development in radiography.

Francis Duck igraduated in Physics from Nottingham University and joined the Medical Physics Department at University College Hospital, London, in 1966, initiating his lifelong career in medical ultrasound. This took him to Canada and the United States before returning to the United Kingdom to settle in Bath as a medical physicist in the National Health Service. Here, with colleagues from the Physics Department at the University of Bath, he pioneered several innovative developments in ultrasound scanning and also took a leading role in setting international standards for its safe medical use. More recently he has developed his interest in the history of science, and particularly the interface between physics and medicine, culminating in his monograph Physicists and Physicians, which traces three centuries of the contributions from physicists and engineers to medicine. In 2007 he was awarded the MBE for services to health care. He was formerly visiting professor at the University of Bath.

SGhdyjudtjghjgchjyfu
GOR010872733
Edith and Florence Stoney, Sisters in Radiology by Adrian Thomas
Adrian Thomas
Springer Biographies
Used - Like New
Hardback
Springer Nature Switzerland AG
2019-07-15
353
3030165604
9783030165604
N/A
Book picture is for illustrative purposes only, actual binding, cover or edition may vary.
The book has been read, but looks new. The book cover has no visible wear, and the dust jacket is included if applicable. No missing or damaged pages, no tears, possible very minimal creasing, no underlining or highlighting of text, and no writing in the margins
Trustpilot