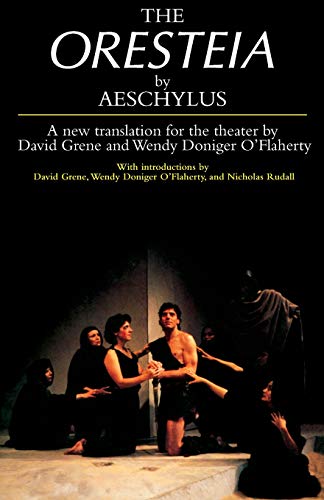 The Oresteia
by Aeschylus

The Oresteia by Aeschylus

These plays embody Aeschylus' concerns with the destiny and fate of both individuals and the state, all played out under the watchful eye of the gods.

In "Agamemnon, the warrior who defeated Troy returns to Argos and is murdered by his wife Clytemnestra for sacrificing their daughter Iphigenia before the Trojan War.

In "The Libation Bearers" (Choephoroi), Orestes, Agamemnon's som, avenges his father by murdering his mother.

In "The Furies" (Eumenides), Orestes flees to Delphi, pursued by the divine avengers (Erinyes) of his mother. After being purified by Apollo, he makes his way to Athens and is there tried (and acquitted) at the court of Areopagus.

GOR003297131
The Oresteia by Aeschylus
Aeschylus
Used - Very Good
Paperback
The University of Chicago Press
1989-03-01
262
0226007723
9780226007724
N/A
Book picture is for illustrative purposes only, actual binding, cover or edition may vary.
This is a used book - there is no escaping the fact it has been read by someone else and it will show signs of wear and previous use. Overall we expect it to be in very good condition, but if you are not entirely satisfied please get in touch with us.