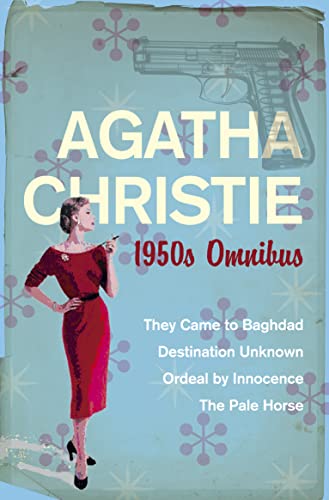 A brand new Agatha Christie omnibus, bringing together all four stand-alone novels she wrote in the 1950s - They Came to Baghdad, Destination Unknown, Ordeal by Innocence and The Pale Horse.

A brand new Agatha Christie omnibus, bringing together all four stand-alone novels she wrote in the 1950s - They Came to Baghdad, Destination Unknown, Ordeal by Innocence and The Pale Horse.

Agatha Christie's imaginative crime novels and thrillers made her a household name from the 1920s right through to her final books in the early 1970s. Best known as the creator of Hercule Poirot and Miss Jane Marple, her prolific output would bring her publisher William Collins at least one book every year. Twenty of her contemporary crime novels were to feature neither Poirot or Marple, instead a wide range of ingenious plots would be played out by a selection of amateur sleuths, professional detectives, young adventuresses or unwary bystanders caught up in unforeseen events.

This collection of five omnibuses gathers together the twenty stand-alone novels, presenting them chronologically and providing a fascinating window on a changing world though six decades of investigation. Presented in this way, recurring characters - including Superintendent Battle, Tommy and Tuppence Beresford, Colonel Johnny Race and Ariadne Oliver - rub shoulders with many who would appear only in one book, and the result is a selection of some of the finest mystery writing ever. Here is the answer to the question of what Agatha Christie might have been had she not invented Poirot or Marple - and the answer undoubtedly is still The Queen of Crime!

GOR001424387
1950s Omnibus (The Agatha Christie Years) by Agatha Christie
Agatha Christie
The Agatha Christie Years
Used - Very Good
Paperback
HarperCollins Publishers
2006-04-03
768
0007208650
9780007208654
N/A
Book picture is for illustrative purposes only, actual binding, cover or edition may vary.
This is a used book - there is no escaping the fact it has been read by someone else and it will show signs of wear and previous use. Overall we expect it to be in very good condition, but if you are not entirely satisfied please get in touch with us.