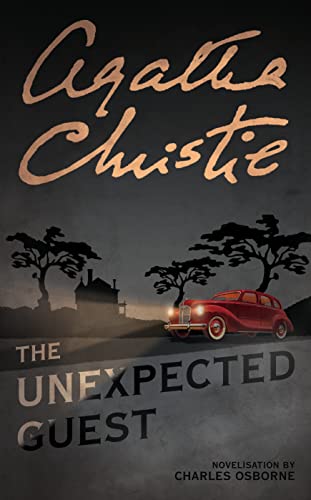 The Unexpected Guest
by Agatha Christie

A young man, broken down in the fog, witnesses a murder he is asked to conceal... A full-length novel adapted by Charles Osborne from Agatha Christie's acclaimed play.

The Unexpected Guest by Agatha Christie

A young man, broken down in the fog, witnesses a murder he is asked to conceal... A full-length novel adapted by Charles Osborne from Agatha Christie's acclaimed play.

When a stranger runs his car into a ditch in dense fog in South Wales and makes his way to an isolated house, he discovers a woman standing over the dead body of her wheelchair-bound husband, gun in her hand. She admits to murder, and the unexpected guest offers to help her concoct a cover story.

But is it possible that Laura Warwick did not commit the murder after all? If so, who is she shielding? The victim's young half-brother or his dying matriarchal mother? Laura's lover? Perhaps the father of the little boy killed in an accident for which Warwick was responsible? The house seems full of possible suspects...

THE UNEXPECTED GUEST is considered to be one of the finest of Christie's plays. Hailed as `another Mousetrap' when it opened on 12 August 1958 in the West End, it ran for 604 performances over the succeeding 18 months and has been staged many times around the world over the last 40 years.

`A lively and light-hearted read which will give pleasure to all those who have long wished that there was just one more Christie to devour'
- Antonia Fraser, Sunday Telegraph

`A worthy addition to the Christie canon'
- The Spectator

Agatha Christie was born in Torquay in 1890 and became the best-selling novelist in history. Her first novel, The Mysterious Affair at Styles, introduced us to Hercule Poirot, the most popular detective since Sherlock Holmes. She is known throughout the world as the Queen of Crime and her works have sold over two billion copies - 80 crime books, 19 plays, and six novels under the name of Mary Westmacott.

Charles Osborne was born in Brisbane in 1927. He is known internationally as an authority on opera, though has had a lifelong passion for Agatha Christie's works. His previous books include The Life and Crimes of Agatha Christie and Black Coffee.

GOR000942945
The Unexpected Guest by Agatha Christie
Agatha Christie
Used - Very Good
Paperback
HarperCollins Publishers
2000-07-03
192
0006513689
9780006513681
N/A
Book picture is for illustrative purposes only, actual binding, cover or edition may vary.
This is a used book - there is no escaping the fact it has been read by someone else and it will show signs of wear and previous use. Overall we expect it to be in very good condition, but if you are not entirely satisfied please get in touch with us.