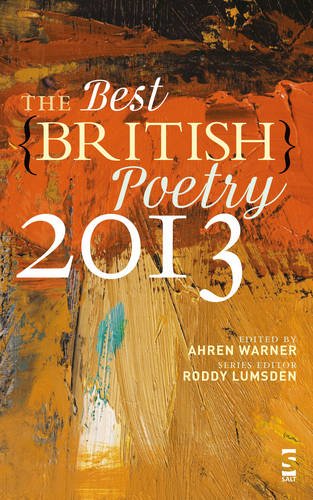 The Best British Poetry has rapidly become the UK's most important poetry anthology. Offering readers and students a comprehensive guide to the year's best poets. The book focusses on poems and not poets and chooses widely from the UK's print and online magazines which are scoured by the editorial team each year.

"When I became a bird, Lord, nothing could not stop me.

by my open window for the charm -

last star of the dawn."

The Best British Poetry has rapidly become one of the UK's most noted collections. Now in its third edition, Salt Publishing is proud to present this thoroughly inspirational selection from this year's best poets.

Offering a completely comprehensive guide for enthusiastic readers and students, this anthology focuses on poems, not poets. Carefully chosen from a wide range of the UK's best print and online magazines, these poems spring to life on the page, breathtakingly original and varied in tone, illuminating, moving and unexpected. From big names such as David Harsent, Alan Jenkins, Ruth Padel and Sean O'Brien, to the wonderful work of Leontia Flynn, Mark Waldron and Charlotte Geater, this collection speaks for itself.

The Best British Poetry 2013 concludes with just short biographical details and comments from each of sixty-eight featured poets, lending it a personal and revealing touch.

A must for the bookshelf of the poetry amateur and aficionado alike.

A positive introduction to contemporary writing in Britain - a far wider range of styles and schools (and both the famous and lesser known, both the established magazines and the new) than is customary in British publications.

It's an exciting thing to hold in your hands an impression of the best of something as it is right now, which is why Salt's new series under the editorship of Roddy Lumsden is so welcome and, perhaps, overdue ... This is more than a collection of poetry, it is a resource. Each poem is accompanied by notes about the writer, and the writer's notes about his or her poem. Indeed the end notes are so comprehensive they take up about a quarter of the book.

The Best British Poetry 2012 is something that those with an interest in contemporary British poetry really ought to have in their possession.

This is an excellent collection, imaginatively and fairly edited, making it easily one of the books that every reader of poetry wanting to know about new British and Irish poetry should own. I already look forward to the 2012 edition.