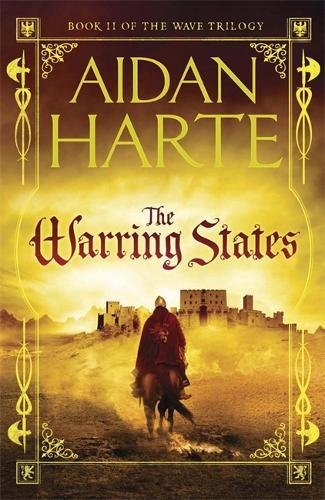 The Warring States
by Aidan Harte

The Warring States: The Wave Trilogy Book 2 by Aidan Harte

The second book in the Wave Trilogy, set in a darkly original alternative Renaissance Italy.

After the rout at Rasenna, Concord faces enemies on all fronts, and nobody believes that the last surviving Apprentice is equal to these crises - but Torbidda didn't become Apprentice by letting himself be manipulated.

While Sofia is struggling to understand her miraculous pregnancy, the City of Towers grows wealthy. But it's not long before the people of Rasenna start arguing again, and as the city falls apart once more, Sofia realises she must escape Etruria to save her baby.

When prophecy leads her to another cesspit of treachery, the decadent Crusader kingdom of Oltremare, Sofia begins to despair, for this time she can see no way out...

Harte manages to combine a series of intricate plot lines, intriguing characters and the creation of his version of renaissance Europe without ever becoming confusing ... Harte proves the genre can be as thought-provoking and intelligent as any other work of fiction ... he has created a world that could have easily stepped out of any history book, but which is infinitely more interesting. * Blogcritics on Irenicon *
. . . exciting and original amid the current fantasy landscape . . . * Fantasy Book Critic *
Harte is a brilliant new voice in historical fantasy, and this is quite simply the best piece of fantasy that I have read so far this year * Inter Zone on Irenicon *
I definitely recommend this one, a real unexpected find for me that I really enjoyed * Tenacious Reader on Irenicon *
If there were stars for world-building Irenicon would be a five plus, no question. * SFX on Irenicon *
Seriously impressed both by the quality of the ideas and the ingenuity with which they are explored in the text . . . Irenicon is completely fascinating * Thinking About Books on Irenicon *
The book is a fountain of gorgeous detail, festooned with enriching codices and enlightening, subtly subsumed exposition * Sci-Fi Now on Irenicon *
. . . twice as impressive as Irenicon . . . [It] will leave you gaping, it really is that rich and worked out in the details * The Book Plank *

Aidan Harte (b 1979) studied sculpture at the Florence Academy of Art and currently works as a sculptor in Dublin. Before discovering sculpture, he worked in animation and TV; in 2006 he created and directed the TV show Skunk Fu, which has been shown on Cartoon Network, Kids WB and the BBC.

GOR005377344
The Warring States: The Wave Trilogy Book 2 by Aidan Harte
Aidan Harte
The Wave Trilogy
Used - Very Good
Hardback
Quercus Publishing
2013-03-26
512
0857389009
9780857389008
N/A
Book picture is for illustrative purposes only, actual binding, cover or edition may vary.
This is a used book - there is no escaping the fact it has been read by someone else and it will show signs of wear and previous use. Overall we expect it to be in very good condition, but if you are not entirely satisfied please get in touch with us.