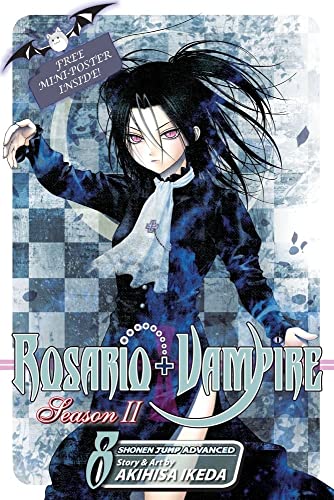 Used Price
$18.49
inc. GST
Free Shipping in Australia
The 8th volume of Season 2 of the manga series set in a high school where the students are all vampires and werewolves
Reviews:
Trustpilot
Like New Very Good

Rosario+Vampire: Season II, Vol. 8: The Secret of the Rosario by Akihisa Ikeda

Average human teenager Tsukune accidentally enrolls at a boarding school for monsters--no, not jocks and popular kids, but bona fide werewolves, witches and unnameables out of his wildest nightmares! On the plus side, all the girls have a monster crush on him. On the negative side, all the boys are so jealous they want to kill him! And so do the girls he spurns, because he only has eyes for one of them--the far-from-average vampire Moka. On the plus side, Moka only has glowing red eyes for Tsukune. On the O-negative side, she also has a burning, unquenchable thirst for his blood...

Akihisa Ikeda was born in 1976 in Miyazaki. He debuted as a mangaka with the four-volume magical warrior fantasy series Kiruto in 2002, which was serialized in Monthly Shonen Jump. Rosario+Vampire debuted in Monthly Shonen Jump in March of 2004 and is continuing in the new magazine Jump Square (Jump SQ) as Rosario+Vampire, Season II. In Japan, Rosario+Vampire is also available as a drama CD. In 2008, the story was first released as an anime. Season II is also available as an anime now. And in Japan, there is a Nintendo DS game based on the series.

GOR008696868
Rosario+Vampire: Season II, Vol. 8: The Secret of the Rosario by Akihisa Ikeda
Akihisa Ikeda
Rosario+Vampire: Season II
Used - Like New
Paperback
Viz Media, Subs. of Shogakukan Inc
2012-04-03
200
1421540509
9781421540504
N/A
Book picture is for illustrative purposes only, actual binding, cover or edition may vary.
The book has been read, but looks new. The book cover has no visible wear, and the dust jacket is included if applicable. No missing or damaged pages, no tears, possible very minimal creasing, no underlining or highlighting of text, and no writing in the margins.