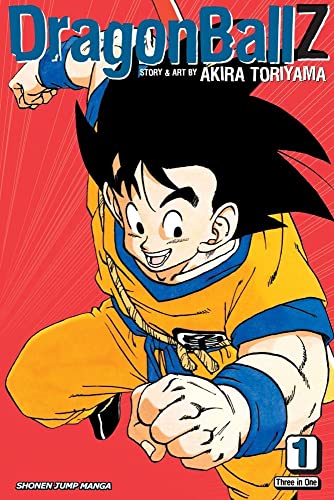 Change your perspective: get BIG

After years of training and adventure, Goku has become Earth's ultimate warrior. And his son, Gohan, shows even greater promise. But the stakes are increasing as even deadlier enemies threaten the planet. DRAGON BALL Z is the ultimate science fiction/martial arts manga.

Five years have passed since the Tenka'ichi Budokai (Strongest Under the Heavens) fighting tournament, where Son Goku emerged as Earth's ultimate champion. Goku has since settled down with a wife and even has a son, Son Gohan. All seems peaceful, until one day when a mysterious visitor appears and reveals that Goku is actually an alien!

The visitor, Raditz, claims that Goku is a Saiyan Warrior, a member of the most powerful race in the universe. When the ruthless Raditz threatens to destroy Goku's family and the entire human race, Goku races to stop him and finds an unlikely ally in Piccolo, his old archenemy...

GOR006047936
Dragon Ball Z, Vol. 1 (VIZBIG Edition) by Akira Toriyama
Akira Toriyama
Dragon Ball Z
Used - Very Good
Paperback
Viz Media, Subs. of Shogakukan Inc
2008-06-03
528
1421520648
9781421520643
N/A
Book picture is for illustrative purposes only, actual binding, cover or edition may vary.
This is a used book - there is no escaping the fact it has been read by someone else and it will show signs of wear and previous use. Overall we expect it to be in very good condition, but if you are not entirely satisfied please get in touch with us.