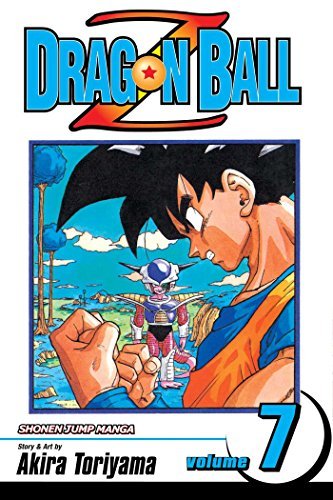 After years of training and adventure, Goku has become Earth's ultimate warrior. And his son, Gohan, shows even greater promise. But the strikes are increasing as even deadlier enemies threaten the planet. More action-packed than the stories of Goku's youth, DRAGON BALL Z is the ultimate science fiction martial arts manga. Get ready for action as time travellers, aliens, deities and the mighty Super Saiyans clash over the fate of the universe! (In Japan, Dragon Ball and Dragon Ball Z were originally a single 42-volume series. VIZ Media's Dragon Ball Z contains vols. 27-42 of the original Japanese Dragon Ball, from the first appearance of Goku's son Gohan to the climax of the series.)

Trapped on war-torn Planet Namek, Earth's heroes Gohan, Kuririn and Bulma struggle to keep the Dragon Balls out of the hands of both Vegeta and the planet-destroying Emperor Freeza. But even a power-up courtesy of the Great Elder of Namek may not be enough to save them from Freeza's reinforcements: the Ginyu Force, the five strongest fighters in outer space, led by the supervillain Captain Ginyu! Desperate times call for desperate measures, and Gohan and Kuririn find themselves with an unlikely ally as their theatrical enemies ro-sham-bo for the honour of who gets to kill them first!

GOR008479279
Dragon Ball Z, Vol. 7 by Akira Toriyama
Akira Toriyama
Dragon Ball Z
Used - Like New
Paperback
Viz Media, Subs. of Shogakukan Inc
2003-05-06
192
1569319367
9781569319369
N/A
Book picture is for illustrative purposes only, actual binding, cover or edition may vary.
This is a used book. We do our best to provide good quality books for you to read, but there is no escaping the fact that it has been owned and read by someone else previously. Therefore it will show signs of wear and may be an ex library book.