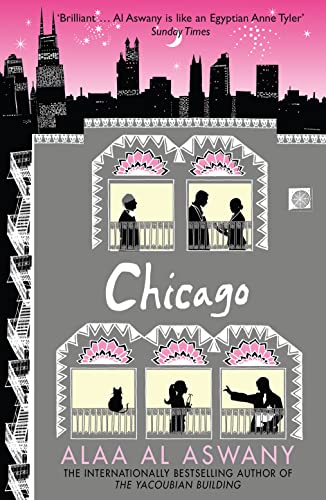 Sex, money and politics are the driving forces of society in this new novel from bestselling author Alaa al Aswany.

Sex, money and politics are the driving forces of society in this new novel from bestselling author Alaa al Aswany.

A medley of Egyptian and American lives collides on the campus of the University of Illinois Medical Center in a post-9/11 Chicago, and crises of identity abound. Among the players are an atheistic anti-establishment American professor of the sixties generation, whose relationship with a younger African-American woman becomes a moving target for intolerance; a veiled PhD candidate whose conviction in the code of her traditional upbringing is shaken by her exposure to American society; an emigre who has fervently embraced his new American identity, but who cannot escape his Egyptian roots when faced with the issue of his daughter's 'honour'; an Egyptian State Security informant who spouts religious doctrines while hankering after money and power; and a dissident student poet who comes to America with the sole aim of financing his literary aspirations, but whose experience in Chicago turns out to be more than he bargained for. This tightly plotted page-turner is set far from the downtown Cairo of al Aswany's `The Yacoubian Building', but is no less unflinching an examination of contemporary Egyptian lives.

`Turned his yarn-spinning gifts to a story of Egyptian medics and students in the Windy City.' Boyd Tonkin, Independent (Book of the Year)

`The only Arabic-language novel to have created greater buzz and sell more copies since "The Yacoubian Building" is Al Aswany's second novel, "Chicago"...a rare opportunity to consider the contemporary Egyptian condition.' Financial Times

`Al Aswany's rich tableaux of everyday lives and devastating social commentary have made him a wildly popular novelist in his native Egypt and the best-selling Arab writer both in the Middle East and abroad...`Chicago' is a powerful indictment of dictatorship and its corrosive effect on human dignity.' Time

`Aswany's novel achieves something surprising, which is to turn great American city into a little Egypt. Aswany's rolling cast of characters and panoramic vision tells us that he wants to investigate the human condition on the largest scale and as in soap operas, he wants to make the spectator feel like part of the family. His book resides firmly within the mainstream of Egyptian fiction, but it is also an unusual and striking post-9/11 American novel.' Chandrahas Choudhury, Scotsman

`His skill in storytelling means that you enjoy reading about even the most unpleasant of the characters and one of the later chapters has such a blood-pumping climax, it should have had a publisher's warning. This is politically charged writing that remembers the essential humanity of its characters.' Tania Ahsan, Metro

`A wonderful storyteller and a cynically astute observer of human folly and frailty.' Francis King, Spectator

`A natural storyteller, the episodic structure lending itself to a series of cliff-hangers worthy of soap opera. A powerful political page-turner.' Amber Pearson, Daily Mail

Alaa Al Aswany was born in 1957. He is a dentist by profession, and for many years practised in the Yacoubian Building, which was to form the setting for his bestselling novel of the same name. He has written prolifically for Egyptian newspapers on politics, literature and social issues.

GOR001291535
Chicago by Alaa al Aswany
Alaa al Aswany
Used - Very Good
Paperback
HarperCollins Publishers
2009-04-30
356
0007286244
9780007286249
N/A
Book picture is for illustrative purposes only, actual binding, cover or edition may vary.
This is a used book - there is no escaping the fact it has been read by someone else and it will show signs of wear and previous use. Overall we expect it to be in very good condition, but if you are not entirely satisfied please get in touch with us.