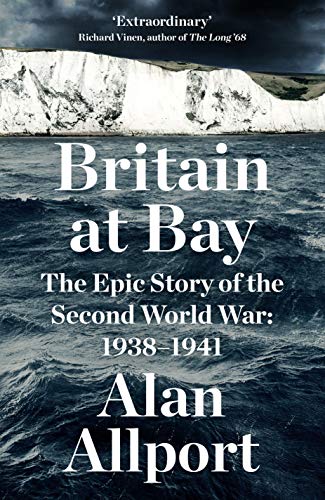 Britain at Bay by Alan Allport

'Extraordinary' - Richard Vinen 'Will make you think anew not just about the war, but about the Britain and Britons that fought it' - Daniel Todman In the bleak first half of the Second World War, Britain stood alone against the Axis forces. Isolated and outmanoeuvred, it seemed as though she might fall at any moment. Only an extraordinary effort of courage - by ordinary men and women - held the line. The Second World War is the defining experience of modern British history, a new Iliad for our own times. But, as Alan Allport reveals in this, the first part of a major new two-volume history, the real story was often very different from the myth that followed it. From the subtle moral calculus of appeasement to the febrile dusts of the Western Desert, Allport interrogates every aspect of the conflict - and exposes its echoes in our own age. Challenging orthodoxy and casting fresh light on famous events from Dunkirk to the Blitz, this is the real story of a clash between civilisations that remade the world in its image.
Simultaneously incisive but nuanced, and studded with sharp pen portraits, Britain at Bay offers a scholarly, invigorating and beautifully constructed tour d'horizon of perhaps the four most crucial years in our island story. -- David Kynaston
This extraordinary book punctures many of the myths that have become so influential about Britain in the Second World War without robbing the period of its spectacular drama * Professor Richard Vinen, author of The Long '68 and National Service *
Written with style and verve, Britain at Bay will make you think anew not just about the war, but about the Britain and the Britons that fought it. A book for anyone who wants to understand this crucial period in the nation's history. -- Daniel Todman, author of Britain's War: A New World, 1942-1947
The beautifully-written Britain at Bay is an impregnable fortress of good sense gallantly resisting the crass sentimentality, exaggeration and naive hindsight of so many accounts of Britain in the early second world war. With great elan, built on deep reserves of historical knowledge, it puts Chamberlain and Churchill in perspective, the Blitz, the Battle of Britain and Battle of the Atlantic in true proportion, and the progress of the imperial war abroad in panoramic view. Its precise and pointed judgements on events, people, and arguments are a bracing reminder of the power of brilliant history to make us reconsider what we think we know about the most familiar part of the British past. -- David Edgerton, author of Britain's War Machine and The Rise and Fall of the British Nation
Expertly researched and marvelously written, this sterling history casts an oft-studied subject in a new light. * Publishers Weekly *
Original, compelling, timely. This is a history that reminds us of the Britain behind the myth of its Second World War. It's a history that many will want to argue with. And that everyone should read. -- Lucy Noakes, Rab Butler Professor of Modern History at the University of Essex
A masterfully written and hugely convincing riposte to a host of popular assumptions about World War II, Britain at Bay confirms Alan Allport's high rank among that select group of historians who can convey serious thought through engaging prose. -- S. P. MacKenzie, McKissick-Dial Professor of History, University of South Carolina
A welcome and highly readable retelling of the story of Britain's entry into the Second World War and its initial survival against great odds. Weaving together grand strategy, high politics and the complexities of British society at the time, Alan Allport deftly demolishes some sacred cows along the way and makes the reader think again about the choices and the odds facing Britain. -- Margaret MacMillan, Emeritus Professor of International History, University of Oxford; Professor of History, University of Toronto
Alan Allport is an Associate Professor in the Department of History at Syracuse University. Born in Liverpool, he grew up listening to family stories of the Merseyside Blitz and the Battle of the Atlantic while building Airfix kits and reading comics. He attended Liverpool Polytechnic where he received an undergraduate degree in physics; afterwards he emigrated to the United States, where he began a second life as a historian. He is the author of two previous volumes of history, Browned Off and Bloody-Minded: The British Soldier Goes to War 1939-1945, described by the historian Andrew Roberts as 'Second World War history at its best', and Demobbed: Coming Home After the Second World War, which won the 2010 Longman-History Today Book of the Year Award. He is a fellow of the Royal Historical Society.
GOR011357157
9781781257814
1781257817
Britain at Bay: The Epic Story of the Second World War: 1938-1941 by Alan Allport
Alan Allport
Used - Very Good
Hardback
Profile Books Ltd
2020-09-03
608
N/A
Book picture is for illustrative purposes only, actual binding, cover or edition may vary.
This is a used book - there is no escaping the fact it has been read by someone else and it will show signs of wear and previous use. Overall we expect it to be in very good condition, but if you are not entirely satisfied please get in touch with us
Trustpilot