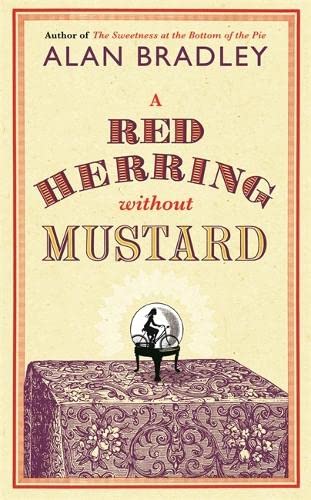 A Red Herring Without Mustard
by Alan Bradley

A Red Herring Without Mustard Summary

'You frighten me,' the Gypsy said. 'Never have I seen my crystal ball so filled with darkness.'

So begins eleven-year-old Flavia de Luce's third adventure through the charming but deceptively dark byways of the village of Bishop's Lacey. What the fortune teller in fact claimed to see was a vision of Flavia's mother, Harriet, who died on a mountainside in Tibet when Flavia was less than a year old. 'She's trying to come home,' the old woman intones. 'And she needs your help.'

For Flavia, the old gypsy's words open up old wounds and new possibilities - not all of them nice ones. Is she a faker, motivated by the fact that the rom used to camp in the grounds of Buckshaw until Flavia's father turned them off, with tragic results? Or is there some truth to her powers, and the message she brings back from the other side?

And when the village is rocked by another ghastly murder, how will a growing fascination with gypsy lore help Flavia to solve it?

A Red Herring Without Mustard Reviews

Praise for the cosy crime Flavia de Luce Mysteries - perfect for fans of Agatha Christie and Midsomer Murders: The Flavia de Luce novels are now a cult favourite * Mail on Sunday *
Certain to become a national treasure * Daily Mail *
Delightfully entertaining * Guardian *
Flavia is enchanting * New York Times *
A breath of fresh air to the world of period-piece sleuthing * Independent *
Flavia is mercilessly addictive * Daily Telegraph *
A clever, witty and totally gripping read with lots of surprises * Essentials *
At once precocious and endearing. Flavia is a marvellous character. Quirkily appealing, this is definitely a crime novel with a difference * Choice *
It's like entering the lost world of the Mitford sisters where the girls are allowed to run completely wild * Crime Squad *
Hilarious, eccentric and mischievous * Deadly Pleasures *
Engaging, entertaining, bright and breezy; and above all, great fun! * Good Book Guide *
What Alan Bradley manages to pull off so well (and remember, he's a fairly elderly Canadian gentleman who is said never to have set foot in England before writing THE SWEETNESS AT THE BOTTOM OF THE PIE) is to create a little world that has its basis only in books, those books that we plunged into, heart and soul, when were eleven too * REVIEWING THE EVIDENCE.COM *
I loved it. The writing grabbed me and refused to let go before I reached the bottom of the first page. It's witty and thought-provoking. I found myself reading about some quite gruesome situations with a grin on my face because the writing was just so good. You'll love Flavia - clever, but not a clever-clogs ... and with her own uncertainties. She's no angel ... and the trick with the Bible quote was wicked but funny -- Sue Magee * THE BOOK BAG *
While fighting off her two older sisters, and helping others, Flavia grows as a person. She shows a lot of spunk, and unlike "Lou Grant", I like spunk. I like this series, and especially Flavia * DEADLY PLEASURES *
This latest entry in Alan Bradley's charming series is every bit as delightful as its predecessors * MYSTERY SCENE *
Former University of Saskatchewan professor publishes his sequel to Bottom of the Pie. This time eleven-year-old sleuth Flavia de Luce gets a tip off from a mysterious gypsy * TNT MAGAZINE *
Flavia is mercilessly addictive -- Jake Kerridge * DAILY TELEGRAPH *
Alan Bradley?s Flavia de Luce series, which is on its third volume with Red Herring Without Mustard, continues to delight, intrigue, and enchant in equal measure * BOOK GEEKS *
The Flavia de Luce novels are now a cult favourite * MAIL ON SUNDAY *
Engaging, entertaining, bright and breezy; and above all, great fun! * GOOD BOOK GUIDE *
I'm a devotee of good storytelling that sucks me in and won't let go until the book is over. A Red Herring Without Mustard is the third of Alan Bradley's charming series featuring 11-year-old Flavia de Luce, an eccentric child with a fascination for chemistry and death. The pitch-perfect books are set in the 1950s, but there is nothing sentimental about Flavia and her world -- Val McDermid * GOOD HOUSEKEEPING *

Alan Bradley is a retired Director of Television Engineering at the University of Saskatchewan, where he lectured on screen writing. He is the author of the memoir, THE SHOEBOX BIBLE, as well as the award-winning Flavia de Luce mysteries.

GOR002643743
A Red Herring Without Mustard: A Flavia de Luce Mystery Book 3 by Alan Bradley
Alan Bradley
Flavia de Luce Mystery
Used - Very Good
Hardback
Orion Publishing Co
2011-03-31
416
0752897152
9780752897158
N/A
Book picture is for illustrative purposes only, actual binding, cover or edition may vary.
This is a used book - there is no escaping the fact it has been read by someone else and it will show signs of wear and previous use. Overall we expect it to be in very good condition, but if you are not entirely satisfied please get in touch with us.