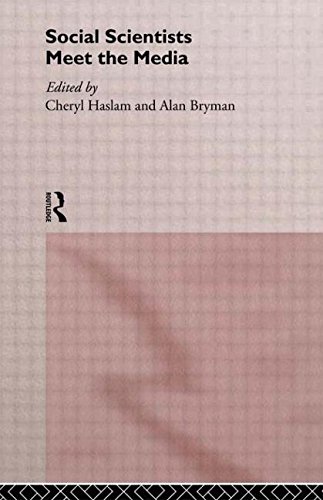 "Part chronicle, part analysis and part advice manual, Social Scientists Meets the Media combines the thoughts of academics and media people to produce a vivid and valuable series of accounts that will prove of service to all academics seeking a wider audience but wary of the terra incognita they face in finding one" Ellis Cashmore, Staffordshire University
Social Scientists know they are in a dilemma: their work may fall prey to sensationalism, but at the same time they don't want to be overlooked. Social Scientists Meet the Media collects the experiences of academics who have sought to publicize their research. It contains personal accounts from social scientists with extensive media contact and representatives from radio, television and the press. Based on these often humorous and sometimes chastening accounts, the editors suggest ways to achieve a more fruitful relationship between social scientists and the media.

GOR010107710
Social Scientists Meet the Media by Alan Bryman
Alan Bryman
Used - Good
Paperback
Taylor & Francis Ltd
1994-04-14
248
0415081912
9780415081917
N/A
Book picture is for illustrative purposes only, actual binding, cover or edition may vary.
This is a used book - there is no escaping the fact it has been read by someone else and it will show signs of wear and previous use. Overall we expect it to be in very good condition, but if you are not entirely satisfied please get in touch with us.