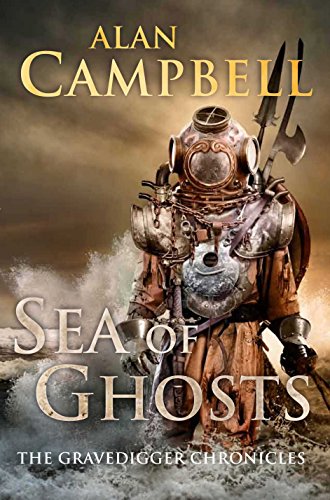 Sea of Ghosts
by Alan Campbell

In Stock
$11.99
+10% GST
A brand new series from the author of the Deepgate Codex series
Very Good Good
Only 1 left

Sea of Ghosts by Alan Campbell

When the last of the Gravediggers, an elite imperial infiltration unit, are disbanded and hunted down by the emperor they once served, munitions expert Colonel Thomas Granger takes refuge in the unlikeliest of places. He becomes a jailer in Ethugra - a prison city of poison-flooded streets and gaols in which a million enemies of the empire are held captive. But when Granger takes possession of two new prisoners, he realises that he can't escape his past so readily.

Ianthe is a young girl with an extraordinary psychic talent. A gift that makes her unique in a world held to ransom by the powerful Haurstaf - the sisterhood of telepaths who are all that stand between the Empire and the threat of the Unmer, the powerful civilization of entropic sorcerers and dragon-mounted warriors. In this war-torn land, she promises to make Granger an extremely wealthy man, if he can only keep her safe from harm.

This is what Granger is best at. But when other factions learn about Ianthe's unique ability, even Granger's skills of warfare are tested to their limits. While, Ianthe struggles to control the powers that are growing in ways no-one thought were possible. Another threat is surfacing: out there, beyond the bitter seas, an old and familiar enemy is rising - one who, if not stopped, will drown the world and all of humanity with it . .

Alan Campbell was born in Falkirk and went to Edinburgh University. He worked as a designer/coder on the hugely successful Grand Theft Auto video games before deciding to pursue a career in writing and photography. He now lives in Lanarkshire. His previous novels include the Deepgate codex series: Scar Night, Iron Angel and God of Clocks.

GOR002820172
Sea of Ghosts by Alan Campbell
Alan Campbell
Used - Very Good
Hardback
Pan Macmillan
2011-04-01
448
0230742947
9780230742949
N/A
Book picture is for illustrative purposes only, actual binding, cover or edition may vary.
This is a used book - there is no escaping the fact it has been read by someone else and it will show signs of wear and previous use. Overall we expect it to be in very good condition, but if you are not entirely satisfied please get in touch with us.