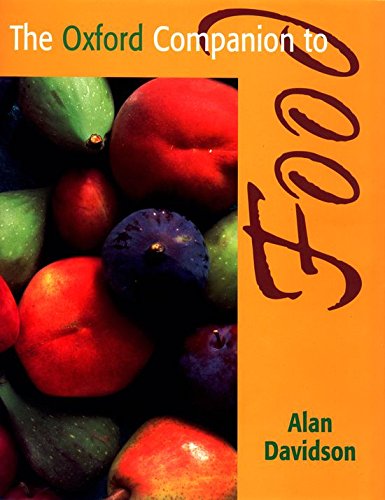 The Oxford Companion to Food
by Alan Davidson

Out of Stock
$26.99
inc. GST
Compiled by one of the world's leading food experts, this book takes a global approach to food in various aspects, historical and cultural, as well as gastronomic. It is intended for those with an interest in food.
Very Good
Only 0 left

The Oxford Companion to Food Summary

The Oxford Companion to Food by Alan Davidson

Twenty years in the making, here at last is the long-awaited magnum opus from one of the world's greatest authorities on the history and use of food and foodstuffs the world over. Food historian and author Alan Davidson has personally written an amazing 80 per cent of this unique work with additional articles by over 50 specialist authors from as far afield as the Philippines, Norway, and Australia. 2650 BRILLIANTLY READABLE A-Z ENTRIES over 40 feature articles highlighting staple foods of the world exquisite delicately drawn illustrations by laotian artist soun vannithone navigation chart to the companion theme- by-theme extensive bibliography the most wide-ranging coverage ever of foods and food products and how to use them from exotic vegetables and spices to edible fungi and fish of all kinds, from common-or-garden carrots to specialities, such as caterpillars, not for the squeamish famous cooked and prepared dishes and drinks from around the world with their main ingredients and method of preparation from cider, crocque-monsieur, and couscous to Sussex pond pudding, sherbet, and sonofabitch stew all the flavours, styles, and staples of national and regional cuisines, past and present, ranging from classical Greek and Roman, Inca, and Moghul cuisine to Parsi food and Jewish cookery, Cambodia, and Celtic feasting culinary terms, cooking techniques, and food science to enlighten amateur cook and professional alike from colour and curdling, to sushi and soffritto; from ice and irradiation, to listeria, and lactose intolerance the history of cookery books and food writers across 2000 years, including major surveys of English, French, Italian, German, Spanish, and American cookery books the place of food in culture and religion, through fasting and feasting, dietary laws and mythology, fast food and soul food, wedding meals and washing up

The Oxford Companion to Food Reviews

"The 'O.C.F' is so entertainingly written that it's easy to forget it's a work of true scholarship. Published in 1999, it was received with great enthusiasm in and out of the food world and found its way onto thousands of bookshelves."--The New York Times Magazine
"From the day it was published--no, from the day the bound proofs arrived--it became the one basic reference work of food scholarship, the volume to which we will all turn first whenever we have a question about food--historical, cultural, or botanical.... It is undoubtedly the most important encyclopedic volume about food published in our lifetimes."--Vogue
"A food book for all time.... The canon of great food literature just got one fat volume greater.... A must-have for any serious food follower."--Gourmet
"The publishing event of the year, if not the decade.... Alan Davidson, the legendarily learned (and eccentric) former British diplomat and international authority on seafood...and godfather to food scholars around the world, has written most of the 2,650 entries, in itself a stupendous feat.... Everyone seriously interested in food must own this book.... A great achievement."--Corby Kummer, The New York Times Book Review
"It is hard to imagine a more congenial companion than Davidson.... This massive volume is nothing short of the grandest of SMORGASBORDS, a sumptuous BUFFET with more SAVORIES, ZAKUSKI and SWEETIES than your typical state dinner. Davidson spent 23 years working on this book, and one can see why: many of the 2,650 entries are worth a separate volume of their own, if not dozens.... A road map to food with a truly global reach... For serious food historians, this will no doubt become an irreplaceable companion. For those amateurs who are merely fascinated by food and who appreciate lucid and witty writing that seeks to deflate the pretensions of your average gastronome, it will provide hours of amusement."--Time Magazine
"A masterly work with a variety of voices, from the straightforward, almost dry, to the quirky and the witty. It will anchor my other research materials, nudging aside 'Larousse Gastronomique' and Waverly Root's 'Food'.... It's hard not to be awed by 892 pages dense with extremely thorough and well-written entries, enhanced by cross-references and indexes and larded with anecdotes and strong opinions."--Florence Fabricant, The New York Times
"Serendipity is a rewarding way to negotiate this colossal volume. Looking up 'chuck' will lead you to 'chuck wagon, ' to 'sourdough, ' and to 'sonofabitch stew, a cowboy dish of unusual character'.... Some day the field of food history...will achieve full academic status and respectability. This will be largely thanks to Mr. Davidson's labors and 'The Oxford Companion to Food.'" --Paul Levy, The Wall Street Journal
"A culinary sine qua non.... This 892-page tour de force will enlighten you as to the history, cultivation, and flavor of every edible you've ever heard of and hundreds more you never even knew existed." --Men's Journal
"Outstanding.... Davidson deserves the eternal gratitude of researchers everywhere.... Destined to become a classic." --Library Journal

Alan Davidson is a distinguished author and publisher, and one of the world's best-known writers on fish and fish cookery. In 1975 he retired from the Diplomatic Service--after serving in, amongst other places, Washington, Egypt, Tunisia, and Laos, where he was British Ambassador--to pursue a fruitful third career (his first was in the Navy in World War II) as a food historian and food writer extraordinaire. Among his popular books are North Atlantic Seafood and Mediterranean Seafood. He and his American wife Jane live at World's End in Chelsea, London.

Introduction; List of contributors; Note to the Reader; 2650 alphabetically arranged entries; Bibliography; Listing of entries by subject; Index of alternate names and sub-topics

GOR003286210
The Oxford Companion to Food by Alan Davidson
Alan Davidson
Used - Very Good
Hardback
Oxford University Press
1999-10-14
908
0192115790
9780192115799
Winner of Glenfiddich Award 2000
Book picture is for illustrative purposes only, actual binding, cover or edition may vary.
This is a used book - there is no escaping the fact it has been read by someone else and it will show signs of wear and previous use. Overall we expect it to be in very good condition, but if you are not entirely satisfied please get in touch with us.