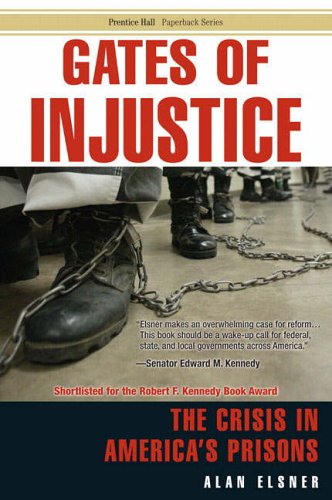 Gates of Injustice
by Alan Elsner

Used Price
$25.99
inc. GST
Free Shipping in Australia
Examines the American prison system, where rapes, assaults, and deaths are regular occurrences, as well as the powerful political and social forces driving imprisonment. This book charts the negative impact on both inmates and society of what is essentially a wasteful and inhumane system, and offers a series of practical proposals for reform.
Reviews:
Trustpilot
Very Good

Gates of Injustice: The Crisis in America's Prisons by Alan Elsner

Gates of Injustice is an extraordinarily compelling expose of the American prison system now completely updated in this new paperback editon: how more than 2,000,000 Americans came to be incarcerated; what it's really like on the inside; what it's like for the families left on the outside; and how an enormous "prison-industrial complex" has grown to support and promote imprisonment in place of virtually every other alternative. Reuters journalist Alan Elsner shows how prisons really work, how race-based gangs are able to control institutions and prey on weaker inmates, and how an epidemic of abuse and brutality has exploded across American prisons. Readers will discover the plight of 300,000 mentally ill people in prisons, virtually abandoned with little medical treatment. They'll also meet the fastest growing segment of the prison population: women. Readers go inside "supermax" prisons that cut inmates off from all human contact, and uncover the official corruption and brutality that riddles jail systems in major cities like Chicago, Boston, Los Angeles, and New York. Finally, they'll learn prisons accelerate the spread of infectious diseases throughout the broader society--just one of the many ways the prison epidemic touches everyone, even if they've never met anyone who's gone to jail.

Alan Elsner has written extensively about conditions in jails and prisons, visiting institutions in a dozen states to meet with inmates, lawyers, corrections officers, medical staff, religious volunteers, family members, and law enforcement. He has 25 years' experience in journalism, covering stories ranging from the September 11, 2001 attacks on America and the Arab-Israeli conflict to the 2000 presidential election and the end of the Cold War. Elsner is currently National Correspondent for Reuters news agency. For more information, visit www.AlanElsner.com.

Preface to the Second Edition xi

Preface to the First Edition xiii

Chapter 5: The Sanity of the System 81

GOR005378182
Gates of Injustice: The Crisis in America's Prisons by Alan Elsner
Alan Elsner
Used - Very Good
Paperback
Pearson Education (US)
2006-01-06
312
0131881795
9780131881792
N/A
Book picture is for illustrative purposes only, actual binding, cover or edition may vary.
This is a used book - there is no escaping the fact it has been read by someone else and it will show signs of wear and previous use. Overall we expect it to be in very good condition, but if you are not entirely satisfied please get in touch with us.