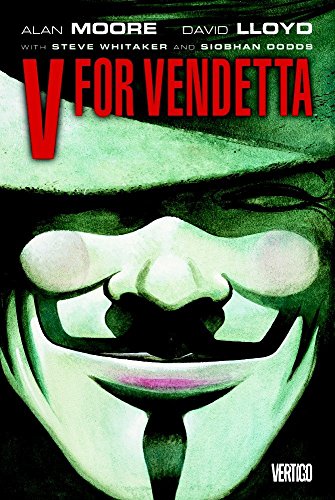 Written by Alan Moore Art and cover by David Lloyd "Perhaps Moore's most powerful work." -PORTLAND MERCURY A new trade paperback edition of the graphic novel that inspired the hit movie! A powerful story about loss of freedom and individuality, V FOR VENDETTA takes place in a totalitarian England following a devastating war that changed the face of the planet. In a world without political freedom, personal freedom and precious little faith in anything comes a mysterious man in a white porcelain mask who fights political oppressors through terrorism and seemingly absurd acts. It's a gripping tale of the blurred lines between ideological good and evil. This new trade paperback edition of the classic series from writer Alan Moore (WATCHMEN, LEAGUE OF EXTRAORDINARY GENTLEMEN) and artist David Lloyd (HELLBLAZER) collects the epic miniseries and features the improved production values and coloring from the 2005 hardcover. On sale January 24 * 296 pg, FC $19.99 US * MATURE READERS

"Mr. Moore, a native of Northampton, England, distinguished himself as a darkly philosophical voice in the medium of comic books -- a rare talent whose work can sell solely on the strength of his name."--The New York Times

"It is a good book, it is smart, and there's no doubt that it remains relevant." --The Guardian

"It's difficult not to be sucked into V's take on anarchy. --PopMatters

Alan Moore is perhaps the most acclaimed writer in the graphic story medium, having garnered countless awards for works such as Watchmen, V for Vendetta, Swamp Thing and Miracleman. He is also the mastermind behind the America's Best Comics line, through which he has created (along with many talented illustrators) The League of Extraordinary Gentlemen, Promethea, Tom Strong, Tomorrow Stories and Top Ten.

GOR005504489
V For Vendetta New (New Edition Tpb) by ALAN MOORE
ALAN MOORE
Used - Well Read
Paperback
DC Comics
2008-10-24
296
140120841X
9781401208417
N/A
Book picture is for illustrative purposes only, actual binding, cover or edition may vary.
This is a used book. We do our best to provide good quality books for you to read, but there is no escaping the fact that it has been owned and read by someone else previously. Therefore it will show signs of wear and may be an ex library book.