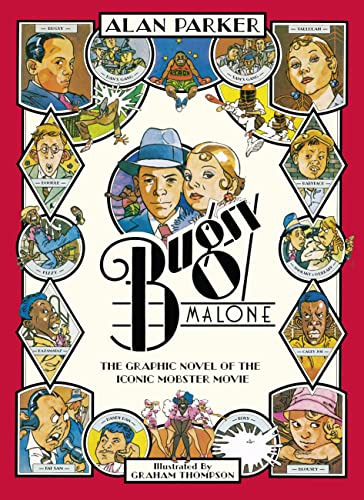 The story behind the beloved film, Bugsy Malone, leaps off the page in this full colour original comic-strip graphic novel.

The story behind the beloved film, Bugsy Malone, leaps off the page in this full colour original comic-strip graphic novel.

In Prohibition-era New York City, Fat Sam runs one of the most popular speakeasies in town - but his rival Dandy Dan is trying to shut him down. It's up to the baby-faced Bugsy Malone to save the day...

Packed with thrills and spills (and more than a few custard pies and splurge), this is a mobster story with a twist - the stars are kids!

* The 1976 movie starring a young Jodie Foster was hugely successful and continues to be popular today, with truly memorable musical numbers including 'Fat Sam's Grand Slam' * Now in graphic novel format, to really pull kids into this classic story

Sir Alan Parker is a director, writer and producer. His feature films have won nineteen BAFTA awards, ten Golden Globes and ten Oscars. His films include Bugsy Malone, Midnight Express, Mississippi Burning, The Commitments, Evita, Fame, Birdy, Angel Heart and Angela's Ashes. He was founding chairman of the UK Film Council and past chairman of the BFI. Sir Alan received the CBE in 1995 and a knighthood in 2002. He is also an Officier Des Arts et Lettres (France).

GOR005916729
Bugsy Malone - Graphic Novel by Alan Parker
Alan Parker
Used - Very Good
Paperback
HarperCollins Publishers
2013-11-25
64
0007514840
9780007514847
N/A
Book picture is for illustrative purposes only, actual binding, cover or edition may vary.
This is a used book - there is no escaping the fact it has been read by someone else and it will show signs of wear and previous use. Overall we expect it to be in very good condition, but if you are not entirely satisfied please get in touch with us.