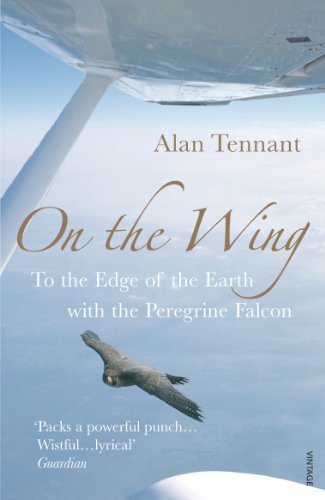 On The Wing
by Alan Tennant

In Stock
$15.49
inc. GST
In this extraordinary naturalist adventure saga, Alan Tennant, a passionate student of wildlife and of the peregrine falcon in particular, endeavours to radio-track the bird's transcontinental migration - something no one before him had ever attempted.
Very Good Good
Only 3 left

On The Wing Summary

On The Wing: To the Edge of the Earth with a Peregrine Falcon by Alan Tennant

In this extraordinary naturalist adventure saga, Alan Tennant, a passionate student of wildlife and of the peregrine falcon in particular, endeavours to radio-track the bird's transcontinental migration - something no one before him had ever attempted. At the time of his flight, in the mid-1980s, researchers were still unsure of the peregrine's transcontinental path: chicks hatched in the Arctic have hardly been taught how to fly and kill their food when they make their first migration, alone, following some mysterious internal call to go south. On The Wing, which begins on the windswept flats of the Texas barrier islands, ferries us across multiple continents, and is loaded with historical and scientific lore and rich characters. Chief among them is George Vose, the septugenarian Second World War vet and former stunt pilot who becomes Tennant's partner in falcon-chasing when they borrow some US Army radio-tracking equipment and set off after a bird Alan has managed to trap and tag with a feather-mounted transmitter. George, who trusts his instincts more than his instruments, is as obsessed with the mystery of flight as Tennant is and the book charts the story of their friendship. As they journey to the Arctic, following their first bird, and then way down South, through Mexico and into Belize, nearly losing their lives, running foul of the law (and, at times, at each other's throats) in the race to keep their birds in view and their rattletrap Cessna gassed up and running. But the falcons dominate this odyssey, these majestic birds - the icons of pharaohs, oriental emperors, and European nobility - whose fierce mien, speed at the kill and solitary habits have fired the human imagination for centuries. In this mesmerising narrative Alan Tennant offers us an unforgettable and moving tale that speaks to all our dreams of flight.

On The Wing Reviews

Alan Tennant grew up in Texas, Florida and the Caribbean. He has taught film and literary criticism at the University of Texas and lectured on ecology in more than twenty countries. He is the author of several prize-winning books on wildlife and nature. He lives in west Texas and conducts natural history seminars and trips around the world.

GOR000542223
On The Wing: To the Edge of the Earth with a Peregrine Falcon by Alan Tennant
Alan Tennant
Used - Very Good
Paperback
Vintage Publishing
2006-02-02
320
0099477483
9780099477488
N/A
Book picture is for illustrative purposes only, actual binding, cover or edition may vary.
This is a used book - there is no escaping the fact it has been read by someone else and it will show signs of wear and previous use. Overall we expect it to be in very good condition, but if you are not entirely satisfied please get in touch with us.