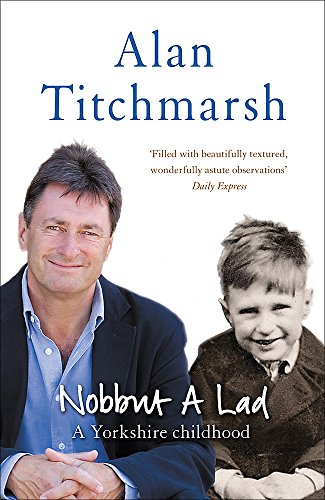 Nobbut a Lad
by Alan Titchmarsh

In Stock
$12.99
inc. GST
One of Britain's favourite TV presenters and novelists brings us his wonderfully evocative and often hilarious childhood memoir
Very Good
7 in stock

Nobbut a Lad by Alan Titchmarsh

In this warm, wonderfully evocative and often hilarious memoir one of the best-loved men in Britain, Alan Titchmarsh, brilliantly recalls his childhood in 1950s Yorkshire.

Alan Titchmarsh grew up, and developed his passion for nature in the wild and beautiful landscape of Yorkshire. A real treat for his millions of fans, the ever-popular presenter vividly depicts a childhood of simple pleasures like climbing trees and fishing in streams, in a time of post-war austerity. It was not a deprived childhood, yet neither was the garden eternally rosy and Alan's colourful portrait of a bygone era brings poignant moments and others that leave you aching with laughter.

Alan's sharp eye for detail brings to life various family members and their memorable quirks, as well as local characters, childhood haunts and significant events that have shaped his life.

Filled with Alan's inimitable down-to-earth humour and heart-warming tales, this memoir is guaranteed to be every bit as well-loved as Trowel and Error, which has now sold over 400,000 copies, and become a classic of childhood memoir.

'A gentle exercise in nostalgia.' * Financial Times *
'Filled with beautifully textured, wonderfully astute observations on the characters that peopled his childhood in the Fifties... very much an anti-misery memoir.' * Daily Express *
'Britain's favourite TV presenter recalls his happy childhood in '50s Yorkshire. With a great eye for detail, he paints an affectionate portrait of a bygone era.' * Woman & Home *

Alan Titchmarsh is known to millions through the popular BBC TV programmes British Isles: A Natural History, How to be a Gardener, Ground Force and Gardeners' World. He has written more than forty gardening books, as well as six best-selling novels and his first volume of memoirs Trowel and Error - notes from a life on earth. He was made MBE in the millennium New Year Honours list and holds the Victoria Medal of Honour, the Royal Horticultural Society's highest award. He lives with his wife and a menagerie of animals in Hampshire where he gardens organically.

GOR000551120
Nobbut a Lad by Alan Titchmarsh
Alan Titchmarsh
Used - Very Good
Paperback
Hodder & Stoughton General Division
2007-07-12
352
0340831189
9780340831182
N/A
Book picture is for illustrative purposes only, actual binding, cover or edition may vary.
This is a used book - there is no escaping the fact it has been read by someone else and it will show signs of wear and previous use. Overall we expect it to be in very good condition, but if you are not entirely satisfied please get in touch with us.