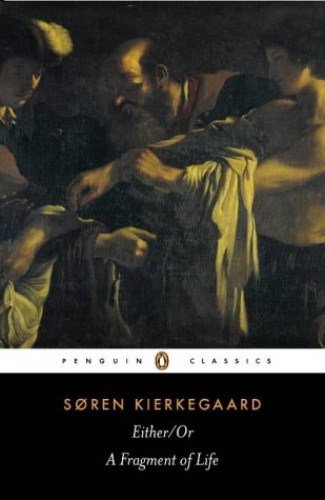 Used Price
$28.99
inc. GST
Free Shipping in Australia
Published in 1843, this is one of the earliest of Kierkegaard's major works. The author plays devil's advocate putting forward two opposing points of view challenging the reader to question the different alternatives. This book is written to provoke philosophical debate.
Reviews:
Trustpilot
Very Good

Either/Or: A Fragment of Life by Alastair Hannay

In Either/Or, using the voices of two characters - the aesthetic young man of part one, called simply 'A', and the ethical Judge Vilhelm of the second section - Kierkegaard reflects upon the search for a meaningful existence, contemplating subjects as diverse as Mozart, drama, boredom, and, in the famous Seducer's Diary, the cynical seduction and ultimate rejection of a young, beautiful woman. A masterpiece of duality, Either/Or is a brilliant exploration of the conflict between the aesthetic and the ethical - both meditating ironically and seductively upon Epicurean pleasures, and eloquently expounding the noble virtues of a morally upstanding life.

Kierkegaard (1813-55) was born in Copenhagen, the youngest of seven children. His childhood was unhappy, clouded by the religious fervour of his father, and the death of his mother, his sisters and two brothers. Educated at the School of Civic Virtue, he went on study theology, liberal arts and science at university, gaining a reputation for his academic brilliance and extravagant social life. He began to criticize Christianity, and in 1841 broke off his engagement to concentrate on his writing. Over the next ten years he produced a flood of works, in particular twelve major philosophical essays, many written under noms de plume. By the end of his life he had become an object of public ridicule, but he is now enjoying increasing acclaim.

GOR001822268
Either/Or: A Fragment of Life by Alastair Hannay
Alastair Hannay
Used - Very Good
Paperback
Penguin Books Ltd
1992-05-28
640
0140445773
9780140445770
N/A
Book picture is for illustrative purposes only, actual binding, cover or edition may vary.
This is a used book - there is no escaping the fact it has been read by someone else and it will show signs of wear and previous use. Overall we expect it to be in very good condition, but if you are not entirely satisfied please get in touch with us.