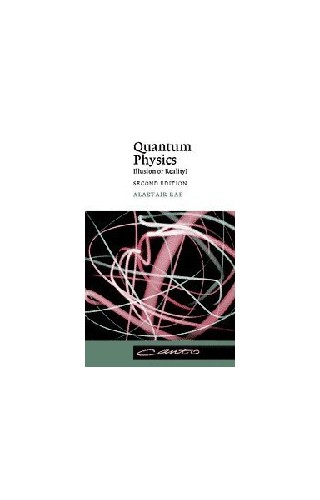 Quantum Physics
by Alastair I. M. Rae (University of Birmingham)

Used Price
$16.99
inc. GST
Free Shipping in Australia
Einstein's famous remark that 'God does not play dice' was his response to a set of new scientific ideas now known as quantum physics. This revised edition to Alastair Rae's introductory exploration into this area contains a new chapter covering theories developed during the past fifteen years.
Very Good Good

Quantum Physics: Illusion or Reality? by Alastair I. M. Rae (University of Birmingham)

Quantum physics is believed to be the fundamental theory underlying our understanding of the physical universe. However, it is based on concepts and principles that have always been difficult to understand and controversial in their interpretation. This book aims to explain these issues using a minimum of technical language and mathematics. After a brief introduction to the ideas of quantum physics, the problems of interpretation are identified and explained. The rest of the book surveys, describes and criticises a range of suggestions that have been made with the aim of resolving these problems; these include the traditional, or 'Copenhagen' interpretation, the possible role of the conscious mind in measurement, and the postulate of parallel universes. This new edition has been revised throughout to take into account developments in this field over the past fifteen years, including the idea of 'consistent histories' to which a completely new chapter is devoted.

About Alastair I. M. Rae (University of Birmingham)

Alastair Rae has been a Lecturer, a Senior Lecturer, then Reader in Quantum Physics in the School of Physics and Astronomy at University of Birmingham from 1967-2003.

Preface to the second edition; Preface to the first edition; 1. Quantum physics; 2. Which way are the photons pointing?; 3. What can be hidden in a pair of photons?; 4. Wonderful Copenhagen?; 5. Is it all in the mind?; 6. Many worlds; 7. Is it a matter of size?; 8. Backwards and forwards; 9. Only one way forward?; 10. Can we be consistent?; 11. Illusion or reality?; Further reading.

GOR002757768
Quantum Physics: Illusion or Reality? by Alastair I. M. Rae (University of Birmingham)
Alastair I. M. Rae (University of Birmingham)
Canto
Used - Very Good
Paperback
Cambridge University Press
2004-10-07
170
0521542669
9780521542661
N/A
Book picture is for illustrative purposes only, actual binding, cover or edition may vary.
This is a used book - there is no escaping the fact it has been read by someone else and it will show signs of wear and previous use. Overall we expect it to be in very good condition, but if you are not entirely satisfied please get in touch with us.