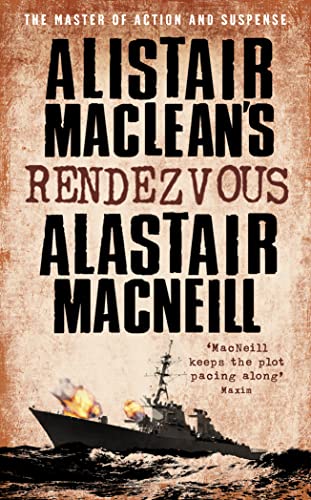 Based on a short story by Alistair MacLean, Rendezvous conjures up the darkest days of the war in the Mediterranean, and the nail-biting drama of a secret life haunted by the fear of betrayal and capture.

Based on a short story by Alistair MacLean, Rendezvous conjures up the darkest days of the war in the Mediterranean, and the nail-biting drama of a secret life haunted by the fear of betrayal and capture.

Early in 1942 the Special Operations Executive and American Military Intelligence must put together a carefully selected team to send on a daring mission which could ultimately change the course of the war in the Mediterranean.

James McIndoe, one of the most experienced operatives in the SOE, forms an uneasy team with two members of the AMI- the beautiful Stella di Mauro and the brash Nicky Ravallo. When it becomes clear that the operation has become compromised the tension mounts, but there can be no turning back, not until the mission has been completed. But with the Germans closing in, there may be no way out...

`Explosive action and mounting tension... well up to the master's standard' Northern Echo

'Mr MacLean's grip on his story and characters is superb... His climax is murderous on the nerves' Sunday Telegraph

Alistair MacLean is brilliant at building up the tension' Sunday Mirror

Alastair MacNeill was born in Greenock, Scotland in 1960. His family emigrated to South Africa when he was six, settling in the coastal city of East London. On finishing school he did a three year course in hotel management at the Hotel School in Johannesburg but, having nurtured a keen interest in writing since his teens, he returned to the United Kingdom in 1985 hoping to pursue a career as a writer. He submitted a manuscript to HarperCollins Publishers and, on the strength of it, was offered the chance to write a novel based on an outline by the late Alistair MacLean. He eventually wrote seven novels based on MacLean synopses and has also written five novels under his own name. He lives in Sheffield.

GOR002009265
Rendezvous by Alastair MacNeill
Alastair MacNeill
Used - Very Good
Paperback
HarperCollins Publishers
1996-10-02
464
0006476236
9780006476238
N/A
Book picture is for illustrative purposes only, actual binding, cover or edition may vary.
This is a used book - there is no escaping the fact it has been read by someone else and it will show signs of wear and previous use. Overall we expect it to be in very good condition, but if you are not entirely satisfied please get in touch with us.