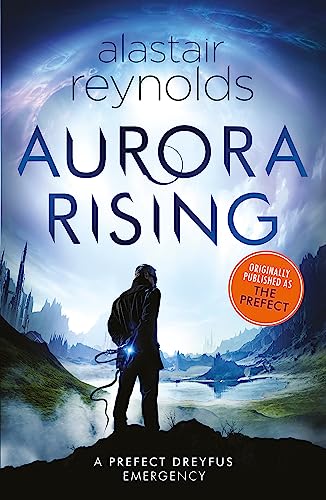 Used Price
$19.99
inc. GST
Free Shipping in Australia
A rollercoaster ride through the dark and turbulent universe of REVELATION SPACE: an interstellar thriller where nothing - and no one - is what they seem . . .
Reviews:
Trustpilot
Very Good Good Well Read

Aurora Rising: Previously published as The Prefect by Alastair Reynolds

Previously published as THE PREFECT.

A rollercoaster ride through the dark and turbulent universe of REVELATION SPACE: an interstellar thriller where nothing - and no one - is what they seem ...

Tom Dreyfus is a Prefect, a policeman of sorts, and one of the best. His force is Panoply, and his beat is the multi-faceted utopian society of the Glitter Band, that vast swirl of space habitats orbiting the planet Yellowstone. These days, his job is his life.

A murderous attack against a Glitter Band habitat is nasty, but it looks to be an open-and-shut case - until Dreyfus starts looking under some stones that some very powerful people would really rather stayed unturned. What he uncovers is far more serious than mere gruesome murder: a covert takeover bid by a shadowy figure, Aurora (who may once have been human but certainly isn't now), who believes the people of the Glitter Band should no longer be in charge of their own destiny.

Dreyfus discovers that to save something precious, you may have to destroy part of it.

Reynolds's narrative is truly breathtaking in scope and intricate in detail, making him a mastersinger of the space opera - THE TIMESThe span here is mind-boggling - GOOD BOOK GUIDEAlastair Reynolds occupies the same frenzied imaginative space as Philip K. Dick or A.E. Van Vogt; that he occupies it as a working scientist is what makes it so exciting - GUARDIANSpace Opera's current Janacek - TELEGRAPHAn adroit and fast-paced blend of space opera and police procedural, original and exciting - George R. R. Martin

GOR008828199
Aurora Rising: Previously published as The Prefect by Alastair Reynolds
Alastair Reynolds
Used - Very Good
Paperback
Orion Publishing Co
2017-11-02
528
1473223369
9781473223363
Short-listed for British Science Fiction Association Award for Best Novel 2008 (UK)
Book picture is for illustrative purposes only, actual binding, cover or edition may vary.
This is a used book - there is no escaping the fact it has been read by someone else and it will show signs of wear and previous use. Overall we expect it to be in very good condition, but if you are not entirely satisfied please get in touch with us.