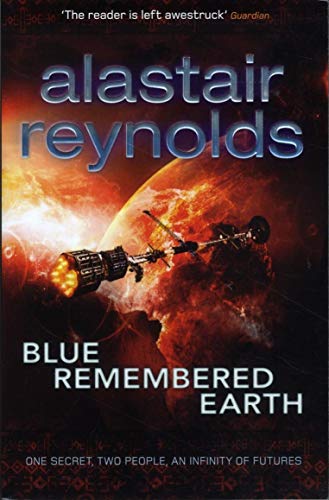 Out of Stock
$16.49
inc. GST
BLUE REMEMBERED EARTH is the first volume in a monumental trilogy tracing the Akinya family across more than ten thousand years of future history...out beyond the solar system, into interstellar space and the dawn of galactic society.
Very Good
Only 0 left

BLUE REMEMBERED EARTH is the first volume in a monumental trilogy tracing the Akinya family across more than ten thousand years of future history ... out beyond the solar system, into interstellar space and the dawn of galactic society.

One hundred and fifty years from now, in a world where Africa is the dominant technological and economic power, and where crime, war, disease and poverty have been banished to history, Geoffrey Akinya wants only one thing: to be left in peace, so that he can continue his studies into the elephants of the Amboseli basin.

But Geoffrey's family, the vast Akinya business empire, has other plans. After the death of Eunice, Geoffrey's grandmother, erstwhile space explorer and entrepreneur, something awkward has come to light on the Moon, and Geoffrey is tasked - well, blackmailed, really - to go up there and make sure the family's name stays suitably unblemished. But little does Geoffrey realise - or anyone else in the family, for that matter - what he's about to unravel.

Eunice's ashes have already have been scattered in sight of Kilimanjaro. But the secrets she died with are about to come back out into the open, and they could change everything.

Or shatter this near-utopia into shards ...

Alastair Reynolds was born in Barry, South Wales, in 1966. He studied at Newcastle and St Andrews Universities and has a Ph.D. in astronomy. He stopped working as an astrophysicist for the European Space Agency to become a full-time writer. REVELATION SPACE and PUSHING ICE were shortlisted for the ARTHUR C. CLARKE AWARD; REVELATION SPACE, ABSOLUTION GAP, DIAMOND DOGS and CENTURY RAIN were shortlisted for the BRITISH SCIENCE FICTION AWARD and CHASM CITY won the BRITISH SCIENCE FICTION AWARD. You can learn more by visiting www.alastairreynolds.com, or by following @AquilaRift on twitter.

GOR004505100
Blue Remembered Earth by Alastair Reynolds
Alastair Reynolds
Used - Very Good
Paperback
Orion Publishing Co
2012-11-08
560
0575088303
9780575088306
Short-listed for John W Campbell Award 2013 (UK)
Book picture is for illustrative purposes only, actual binding, cover or edition may vary.
This is a used book - there is no escaping the fact it has been read by someone else and it will show signs of wear and previous use. Overall we expect it to be in very good condition, but if you are not entirely satisfied please get in touch with us.