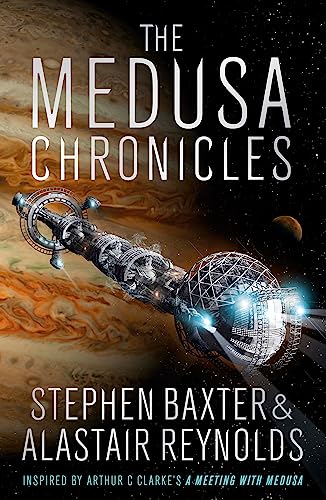 The Medusa Chronicles
by Alastair Reynolds

Used Price
$14.49
inc. GST
Free Shipping in Australia
Inspired by Arthur C. Clarke's Nebula Award winning A Meeting with Medusa, this is a epic adventure from two of the greatest science fiction writers of our time.
Reviews:
Trustpilot
Very Good

The Medusa Chronicles by Alastair Reynolds

Inspired by Sir Arthur C. Clarke's short story A Meeting with Medusa, this novel, with permission from the Clarke Estate, continues the story of Commander Howard Falcon over centuries of space-exploration, interaction with AI, first contact and beyond. All brought to life by two of our greatest SF authors, Stephen Baxter and Alastair Reynolds.

Howard Falcon almost lost his life in an accident . . . and a combination of human ingenuity and technical expertise brought him back. Not as himself, but as an augmented human: part man, part machine, and exceptionally capable.

The Medusa Chronicles charts his journey through time, the changing interaction between humanity and our universe, and combined moments of incredible action with unparalleled exploration of and expansion into space. A compelling read from the beginning, this is classic SF which has appeal for readers who like Gravity and The Martian.

'A vivid and vital take on a pace age future that never actually happened. Clarke, you may find yourself thinking, would surely approve.' * SFX *
A joy to read, it's yet another feather in Baxter and Reynolds' well-adorned hats. * SCIFINOW *
With these two titans of the genre, jaw-dropping imagination and laser-sharp wordcraft are guaranteed. They have created a beautiful novel, wonderful to explore. * THE SUN *
brings the strengths of both writers - a thorough grasp of scientific principles and the ability to present them in well-paced, engaging narratives * The Guardian *
it certainly contains all that I love in the writing and imagination and vision of both Stephen Baxter and Alastair Reynolds. Full justice has been done to Clarke and his original short story and I can only hope for more. My only greedy complaint is that I wish the book were longer. What there is, though, is wondrous and perfect. * For Winter's Nights *
Stephen Baxter and Alistair Reynolds choose to focus instead on the characters to help pull the storyline forward and that was what I liked most about The Medusa Chronicles, it's a character driven sci-fi book, something I feel the genre needs more of. * The YA Bookshelf *
Baxter and Reynolds are the ideal writers to take this on. They capture a sense of the awe of the universe and the humility of the position of humanity within it, but they also clearly have a lot of fun with some very old SF genre conventions in the process. * Geek Life *
if you like a political story combined with the effects of human interplanetary space travel, this book is definitely for you. * Livingforbooks *
Humanist, meditative, this is old-fashioned science fiction as evidenced by its sense of wonder and a positive attitude to scientific progress but, alongside, manages to keep the thrills on overdrive and the cosmic and planetary problems ticking along. A good read. * Lovereading.co.uk *
If I'm honest, I wasn't expecting The Medusa Chronicles to be much more than a tip of the hat to Arthur C. Clarke, but Baxter and Reynolds go far farther by realising a resounding sweep of a story with rich seams of science and speculation, some unforgettable spectacle and not a few emotional moments. * TOR.COM *
One of the most compelling novels of either author's career, it combines moments of incredible action with an intricately-realised depiction of an expansive universe. * GEEK SYNDICATE *

Alastair Reynolds was born in Barry, South Wales, in 1966. He studied at Newcastle and St Andrews Universities and has a Ph.D. in astronomy. He stopped working as an astrophysicist for the European Space Agency to become a full-time writer. REVELATION SPACE and PUSHING ICE were shortlisted for the ARTHUR C. CLARKE AWARD; REVELATION SPACE, ABSOLUTION GAP, DIAMOND DOGS and CENTURY RAIN were shortlisted for the BRITISH SCIENCE FICTION AWARD and CHASM CITY won the BRITISH SCIENCE FICTION AWARD. You can learn more by visiting www.alastairreynolds.com, or by following @AquilaRift on twitter. Stephen Baxter is the pre-eminent SF writer of his generation. With Terry Pratchett he has co-authored the Long Earth novels. Published around the world he has also won major awards in the UK, US, Germany, and Japan. Born in 1957 he has degrees from Cambridge and Southampton. He lives in Northumberland with his wife. Visit Stephen Baxter's website at www.stephen-baxter.com.

GOR008208323
The Medusa Chronicles by Alastair Reynolds
Alastair Reynolds
Used - Very Good
Paperback
Orion Publishing Co
2017-01-12
336
1473210208
9781473210202
N/A
Book picture is for illustrative purposes only, actual binding, cover or edition may vary.
This is a used book - there is no escaping the fact it has been read by someone else and it will show signs of wear and previous use. Overall we expect it to be in very good condition, but if you are not entirely satisfied please get in touch with us.