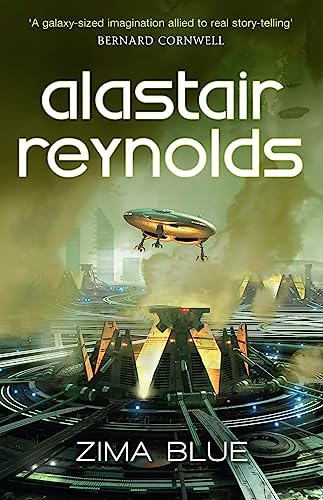 Out of Stock
$22.49
inc. GST
A fabulous collection spanning the galaxies and career of SF superstar Alastair Reynolds.
Very Good
Only 0 left

Reynolds' pursuit of truth is not limited to wide-angle star smashing - not that stars don't get pulverised when one character is gifted (or cursed) with an awful weapon by the legendary Merlin. Reynolds' protagonists find themselves in situations of betrayal, whether by a loved one's accidental death, as in 'Signal to Noise', or by a trusted wartime authority, in 'Spirey and the Queen'. His fertile imagination can resurrect Elton John on Mars in 'Understanding Space and Time' or make prophets of the human condition out of pool-cleaning robots in the title story.

But overall, the stories in ZIMA BLUE represent a more optimistic take on humanity's future, a view that says there may be wars, there may be catastrophes and cosmic errors, but something human will still survive.

GOR001728429
Zima Blue by Alastair Reynolds
Alastair Reynolds
Used - Very Good
Paperback
Orion Publishing Co
2010-04-08
464
0575084553
9780575084551
N/A
Book picture is for illustrative purposes only, actual binding, cover or edition may vary.
This is a used book - there is no escaping the fact it has been read by someone else and it will show signs of wear and previous use. Overall we expect it to be in very good condition, but if you are not entirely satisfied please get in touch with us.