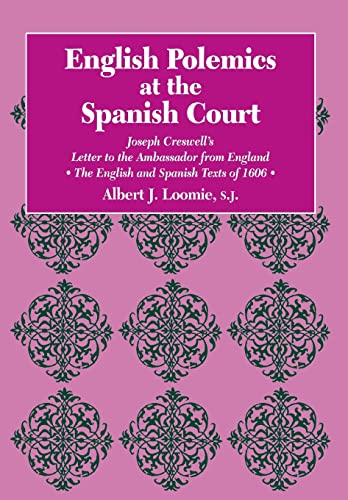 English Polemics at the Spanish Court
by Albert J. Loomie

Used Price
$54.99
inc. GST
Free Shipping in Australia
Offers an annotated edition of both Creswell's English text, based on the original copy presented to the ambassador of James I, and his contemporary Castilian version from the Biblioteca Nacional in Madrid. Creswell draws on his personal knowledge to write comments about the Gunpowder Plot events.
Very Good

English Polemics at the Spanish Court: Joseph Creswell's Letter to the Ambassador from England by Albert J. Loomie

In 1606 when the Spanish court learned about the recent Draconian laws against the Catholics in England in the aftermath of the notorious Gunpowder Plot, Joseph Creswell, a well-known Jesuit living in Madrid, wrote a public letter to Sir Charles Cornwallis, the ambassador of James I. His carefully reasoned tract argued that violence against the consciences of Englishmen and women was no longer in place after the peace treaty arranged between the two hostile Catholic and Protestant kingdoms was signed. To rally support among influential leaders in the court capital of the Spanish king, he printed a Castilian translation of the "letter" for simultaneous circulation.

Readers have, for the first time, an annotated edition of both Creswell's English text, based on the original copy presented to the ambassador (now located at the British Library) and his contemporary Castilian version from the unique copy in the Biblioteca Nacional in Madrid. In this book, historians, political philosophers, and scholars of Jacobean prose and polemics will find a new author added to the library of English recusant literature of the early seventeenth century. Joseph Creswell drew upon his considerable personal knowledge to write the earliest printed contemporary comments about the events in the aftermath of the Gunpowder Plot.

Hereto known only as a close associate of more famous writers of the counter Reformation, such as Robert Persons or Pedro de Ribadeneyra, Joseph Creswell can now be seen as an original and lively polemicist seizing an opportunity to address both an English and Spanish audience.

"A masterful edition of a public letter to Sir Charles Cornwallis, English Ambassador to the Spanish Court of Phillip III by Joseph Creswell, a prominent English Jesuit residing in Madrid. Drafted in 1606, the polemic argues for relief from the new penal laws passed by Parliament in reaction to the notorious Gunpowder Plot. " * -Albion *

GOR010379553
English Polemics at the Spanish Court: Joseph Creswell's Letter to the Ambassador from England by Albert J. Loomie
Albert J. Loomie
Used - Very Good
Hardback
Fordham University Press
1993-01-01
210
082321446X
9780823214464
N/A
Book picture is for illustrative purposes only, actual binding, cover or edition may vary.
This is a used book - there is no escaping the fact it has been read by someone else and it will show signs of wear and previous use. Overall we expect it to be in very good condition, but if you are not entirely satisfied please get in touch with us.